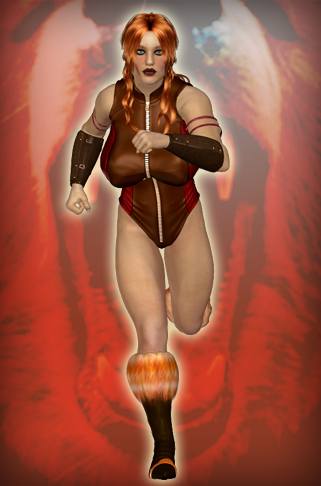 Yekaterina Ursaslovia was born on a battlefield to two proud, patriotic Russian parents during World War II. Her father served in the 13th Guards Rifle Division while her mother, a field nurse, was stationed nearby. Her mother once told her that her birth amidst turmoil was a testament to her and her family’s fighting spirit, a lesson young Yekaterina took to heart.

As she grew older, she began displaying signs of abnormal size and strength compared to the other children. When several young boys began teasing her on the schoolyard, she retaliated with the fighting spirit her family was known for. However, the event left a half-dozen boys hospitalized, she was expelled from school, and her parents began to worry about her unnatural abilities and the attention it brought them.

Their fears were not unfounded, as her family was visited by KGB operatives that expressed a particular interest in her talents and their use for the government and Communist party. Overhearing the discussion, Yekaterina instead ran away from home.

She hitchhiked her way across Russia, often finding work in lumber yards, shipping docks, and farming communities. But every time she began to settle down, she caught wind of government agents on her tail and fled once more. She stumbled upon a traveling circus during one such flight and impressed the ring leader with her phenomenal strength. She was appointed as the circus’s strongman, dubbed “the Bear Queen”, dazzling families and children with her feats of strength, and their constant traveling helped ensure she couldn’t be found.

Or so she thought. Her reputation for impossible feats of strength spread, and after performing for a large crowd, she was ambushed in her tent, immobilized, and abducted to a secret KGB lair. There, it was made clear to her that she was to become their weapon for USSR should the escalating Cold War reach a boiling point. For years, she was “re-educated” with Communist propaganda, subliminal programming, and secretive brainwashing techniques, and her body trained through a serious of grueling regiments to fashion her into USSR’s ultimate soldier. She was to become Russia’s most dangerous secret weapon, the first in a superhero team dubbed “The Red Irons”.

That classified intel, however, was leaked to the McNorm family, who specialized and built their fortunes upon the hunting and capture of wild game, and who recently had graduated to testing their skills against superheroines. When the KGB learned of the leak, they intentionally sent Yekaterina on a mission that would ensure she crossed paths with the McNorms, confident she would emerge victorious.

They were mistaken. Yekaterina, despite her abilities, was soundly defeated and put into stasis at the McNorm estate as a living trophy of their conquest. Humiliated, the KGB destroyed all documentation and files related to their experiments on her and officially erased Yekaterina’s background so she could never be found.

For decades, Yekaterina served as either a statuesque displace piece in the McNorm estate, or as a living pleasure doll for their decadent lifestyles. However, after a long shelf-life, she and her fellow trophy slaves, Blaze Bunny and Lioness, were freed through the efforts of Honeydoll and her robotic double,Galatea. The newly liberated Bear Queen now finds herself in Metrobay, struggling to make sense of a world she feels she hardly has a place in.