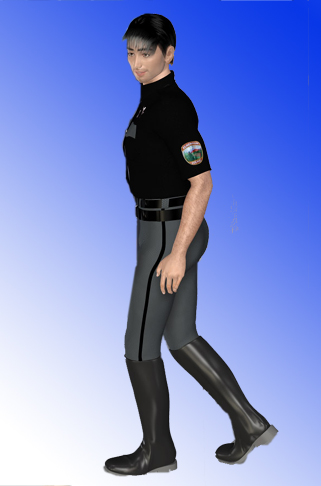 The male species definitely gets a bad rap in Metrobay, and much of it is deserved. Most of the men in town fall into one of two categories: sniveling coward or disgusting pervert. Mick Jones is the exception to that rule, at least for the most part.
Born to working class parents, Mick grew up in suburban Metrobay with a childhood like most kids. He was a relatively shy and quiet young man, preferring to spend his free time with his few close friends. Mick has had two loves in his life, art and Patricia Summers… and not necessarily in that order. He has known Patti nearly his entire life, and has had a crush on her for just as long. Even though they grew up in the same neighborhood and went to the same school, he never really acted on his feelings until they were both enrolled at Metrobay University and he finally worked up the nerve to ask her out. Soon after they discovered their mutual appreciation for comics, graphic design, and each other. The rest, as they say, is history.

Around the time of the so-called Night of the Drones, Mick felt a strong desire to join the Metrobay Police Department while still logging major hours finishing up his college degree. He enrolled in the police academy, taking a seat alongside cadets such as Crissy Tanner, spending his days in one classroom and his nights in another. As mentioned earlier, some of the most famous men in Metrobay are slimeballs like Max Indeks, Syman Sayz, and The Maestro. Even a relatively upstanding citizen like Ted Twiss is himself a reformed criminal. Knowing this, Mick felt a need to bring a little pride back to his gender and joined the police force to do just that. His girlfriend encouraged him to follow his heart, simultaneously proud of his decision yet concerned at what may lie ahead for an officer of the law in a sometimes lawless town.

Ironically it was Patti and her mother Raquel who first fell victim to a criminal scheme in the form of the H.E.R.-TV mind control ray, transformed into mindless human robots while Mick, still just a cadet, was forced to watch with no way to save them. Thankfully they were rescued by members of the Superheroine Squad, but who knows what other trouble these two sexy ladies can get into in a city which is home to so many freaks, thugs, and psychopaths.

Recently, Mick ran into Hypnotica, the apparent superpowered alter-ego of his girlfriend, who had broken into the police station and sprung Troublina from jail while following Max Indeks’s misguided orders and trying to do some good. Unwilling to turn her in to the authorities, he opted to hide her at his place until the heat died down and he could get some answers. However, apparently to both their surprise, the superheroine Snowflake was at his apartment, leading Hypnotica to conclude that the two were having an affair. While he claimed she was merely house-sitting for him, Snowflake seemed to show some interest in Mick which sparked Hypnotica’s jealousy. She angrily hypnotized them and unwittingly had them pleasure her for hours before departing to see Max Indeks, leaving the two undressed and confused behind her.

Mick himself has had the good fortune to rub elbows with some of the most powerful people in Metrobay. He has had run-ins with Ms. Metrobay and Solaria and is even aware of his classmate Kyla’s secret identity as Snowflake. He also had a highly memorable tryst with a mind controlled Violet Star and veteran heroine Brown Sugar , though it was implied one or both were under the influence of Alpha Woman’s telepathic powers at the time. He has also confessed a secret attraction towards police secretary Kristin Thomas, unaware of her identity as Valient Grrl.