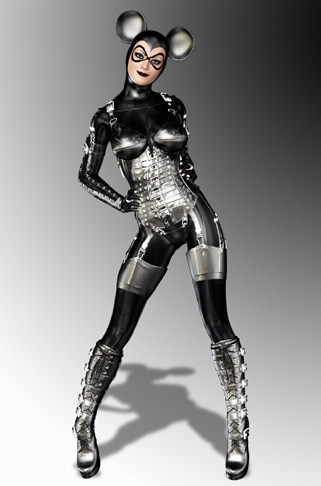 Mousey Mitsi Murina grew up with her nose in the books. Ironically though, her parents were both lowly minions for hire; Iron Head Harry and Quick Draw Doris. Harry and Doris worked at different times for a variety of masked supervillains, such as: being tricksters under the Trixtress; cooking up trouble as short order cooks for Chef Pasty; and criminal Klowns under the Black Hat among other various nefarious occupations. So, it was just as surprising to Harry and Doris as it was to everyone else that their child Mitsi was a natural-born genius.

True to their criminal natures, Harry and Doris saw Mitsi’s brilliance as a vehicle to make themselves rich. They used their underworld friends and influence to get Mitsi the best tutors and into the best schools. Her parents relentlessly drove her to study non-stop. Mitsi had no time for friends or any kind of social life. Her every waking moment was spent studying.

The Murinas lived in the Grime City section of Metrobay, and rats were everywhere. But, to Mitsi, rats became her only companions. She’d feed rats with one hand while holding her book with the other hand. Alley cats that came around got shooed away by Mitsi, who protected her rat companions from the ferocious felines. Over time, generations of rats became familiar with Mitsi as if she were one of them.

At the behest of her parents, Mitsi was taken under the care of crime queen Madame Mynx. Mynx would have the money and resources to ensure Mitsi received the highest education. Also, her parents hoped it would put them in good with Madame Mynx. As it so happened, Madame Mynx had been on a mission to place professors loyal to R.O.P.E. in the Metrobay University faculty. Her goal was to have the entire faculty staffed by R.O.P.E. minions who would help ‘recruit’ unsuspecting coeds to become R.O.P.E. slaves. Mynx intended Mitsi to complete her education and become one of her teaching minions at the university.

But, Mitsi’s obsession with rodents caused her to try to free all the lab rats from the school of science. She was busted by the Action Cats, but Trixtress helped Mitsi escape. Outraged by what she saw as Mitsi’s silly love of rats, madame Mynx had Dr Tinker put Mitsi into the Mind Molder machine intending to give Mitsi a state of mind more suitable to being Mynx’s evil minion. Unknown to Mynx and Dr Tinker, Trixtress messed with the machine settings causing Mitsi to undergo an extreme personality change. Trixtress was jealous of Mynx and wanted to make Mitsi into a headache Mynx could not get rid of.

When the process ended, mousy sweet Mitsi had become the crazed cat hating Meanie Mouse. Now, as Meanie Mouse, Mitzi puts all her energy into trying to capture and torment the Action Cats… planning to eventually make the kitties her submissively obedient sex slaves to serve her every demented desire.