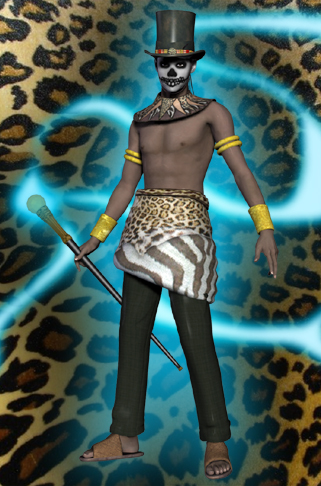 The villainous dark wizard Papa Voodoo has been a boogeyman in the shadows for much of Metrobay’s history. His origin is shrouded in secrets, lies, and myth. Whoever he was once, or where he came from, may never be known, but legends speak of a man with a black heart and a lust for power and perversion. Filled with wickedness, he sought out the black arts and dabbled in the forbidden occultist tomes, intent on unearthing long-buried evil spirits and power.

Whether the rumors are true or not, the reality of Papa Voodoo is undeniable, with confirmed sightings of the dark sorcerer stretching back to the turn of the century in rural Metrobay and its surroundings. During this time, he was a frequent adversary of the legendary Calico Kitty, but after a time and many defeats he vanished and his powers fell dormant.

However, he has recently reemerged in modern day, more powerful and ruthless than before. Channeling his dark abilities, he has begun stealing the very souls of Metrobay and Hooter County’s citizens, powering him up further and leaving their soulless bodies as obedient, undead husks, which he deemed “Sexombies”, eager to do his every bidding.

Papa Voodoo’s powers are vast and potentially limitless. His knowledge of the occult and voodoo black magic has seemingly endowed him with eternal life and decades of experience mastering black magic, the ability to drain a body of its soul, and the transformative power to create obedient Sexombies. He’s been seen demonstrating other abilities, ranging from teleportation, invisibility, body control, possession, and other forbidden arcane abilities.

However, his powers have limits and he has displayed a dependency on his various occult totems and trinkets to assist him in his tasks. Without them, he is far more vulnerable… but still a formidable and cunning adversary.