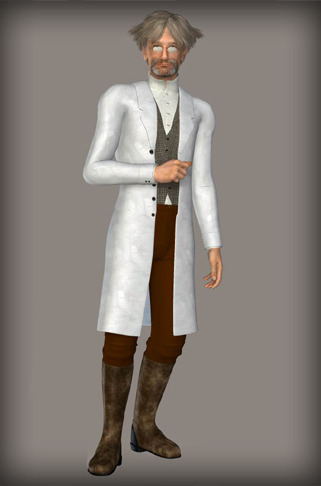 You can count on one hand the number of people in Metrobay who are able to boast that they have defied Max Indeks to his face and lived to tell about it. Gilbert E. Petto is one of those brave few. Gilbert’s parents – hard working, salt of the earth types – moved to Metrobay after the great war eager to make a new life for themselves and their only son. They scraped enough money together to send Gilbert off to the finest college in town, Metrobay University, to study the burgeoning field of electronics. Gilbert flourished, becoming the youngest doctoral recipient in school history and landing a position on the faculty in only his mid-20s.

A few years later Max Indeks took notice of Gilbert’s proficiency in technology and robotics and repeatedly offered him a job at the fast-growing APEX Industries. Time and time again Gilbert refused, happy to continue working and teaching at the university for a fraction of what he could make in the private sector. During his tenure at the university Gilbert instructed many budding intellects, most notably young Ted Twiss and Belinda Giolla. One day Gilbert was in Vestia Park testing a prototype for a life-size security android when he witnessed Ms. Metrobay battling the team of villains known collectively as Crime Time. Gilbert used his droid to help defeat the thugs, henchmen of R.O.P.E. no less, earning Ms. Metrobay’s gratitude and even more of Max’s wrath.

Furious at Gilbert’s repeated rejections and his interference in R.O.P.E. affairs, Max used his significant political influence to have the professor fired from his teaching gig and evicted from his campus apartment. With his reputation in tatters, Ms. Metrobay returned his earlier good deed and used her connections to get Gilbert the money and resources he needed to begin a new career. Gilbert opened a small business not far from campus and soon became famous for his realistic dolls and action figures, so much so that he was known publicly as simply “The Dollmaker”. To this day Gilbert spends long hours in his workshop creating his latest and greatest toy masterpieces, while Max Indeks quietly waits for the right opportunity to prove that no one ever says no to him and gets away with it.

Gilbert recently used Ms. Metrobay to create a highly advanced and life-like artificial doll using APEX technology. His doll, “Lisa”, however, was taken from him by Max Indeks and turned into the villainousMilkMaid, while simultaneously drawing the ire of Ms. Metrobay. Perhaps in an act of desperation or depression, Gilbert sought to replace his lost creation, using Brown Sugar as his new template and creating a new doll, which he has called “Mona”. Shortly after this was completed, Brown Sugar was summoned to an undisclosed location. It is uncertain what Gilbert’s current plans are for his new creation, besides a thorough field-testing for customer satisfaction.

Strangely, Gilbert has also appeared in a dream of Crissy Tanner’s where he created a robot replicate of the heroine, though she infers she had no prior knowledge of his existence. It is unknown if the two have ever met, but the possiblity exists that Ted or Ms. Metrobay mentioned him to her and she simply forgot. Regardless, in a strange sort of fulfilled prophecy, Crissy eventually DID track Dollmaker down and demanded he created a robot duplicate of herself, which he did. However, when he was unable to transfer Crissy’s mind into her new robotic twin, Crissy grew upset. Eventually, he offered a trade; he’d provide her information on those that might make her fantasy come true while she sought to return Lisa to him.