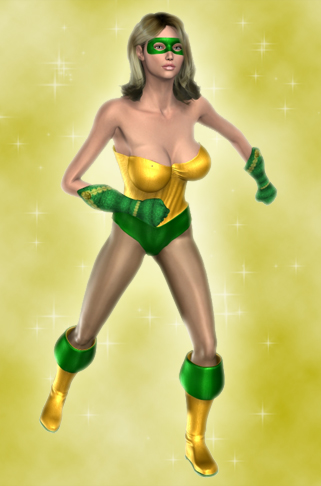 Jancie Florenco is a rising young investigative reporter for the Daily Metro and the DDD-TV network who has dedicated her life to scoring a big scoop and making a name for herself in the media world. Fresh out of Metrobay University’s famed journalism school, Janice has discovered many shocking secrets in the underbelly of Metrobay and has been eagerly trying to bring them to the public’s attention.

Janice ran into several dead ends during her investigations, denied access to some of the more obvious hotspots of criminal activity. Unable to bribe or sneak her way inside these secret clubs and backroom criminal circles, she decided more drastic measures were required.

During one of her many investigations she discovered the secret identity of Bluebird, that of assistant district attorney Heather Reins. Janice blackmailed the heroine into accepting her as a junior sidekick, thus giving her an incredibly wide sphere of influence, superheroine connections, and access to the more restricted locales in Metrobay.

Despite her good intentions and status as a member of Superheroine Squad and Grrl Power, Janice really doesn’t care about any of that. All she cares about is getting her story, and she is willing to take drastic measures to get it.

Her partnership with Bluebird, rocky from the start, only grew more strained. Janice grew to loathe her more experienced partner’s constant lectures, pep talks, instructions, and warnings. She hated the way she was treated, despite being a skilled and respectable crimefighter in her own right.

Things came to a boiling point during an encounter with Clownetta. A carefully laid out plan by Janice (at the time operating under the codename “Sparrow”) was brushed aside by Bluebird, who botched her own rescue attempt and wound up Clownetta’s prisoner. As revenge, Sparrow escaped her confines and tied up both Bluebird and Clownetta, forcing them both to pleasure her carnal urges, and then leaving them in an embarrassing display for the police to find. 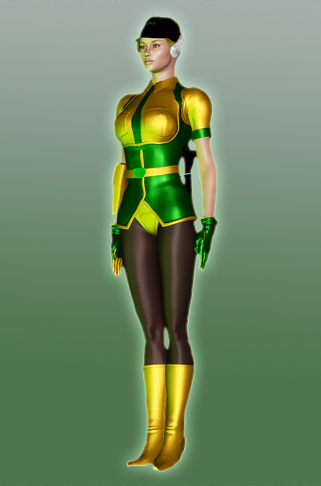 Recently, she and Bluebird were duped into being framed for a kidnapping staged by Max Indeks and the Boyz, with some notable assistance from Sergeant Erica Donovan and Ginger Monroe. They were hauled away to the Funhouse and put under Belinda’s care for her experiments. Bluebird was subjugated to the psycho-slaver and turned into an obedient lesbian thrall under Belinda’s control. Bluebird promptly began to sexually stimulate a captive Swallow, then later assisted in strapping her into the psycho-slaver, brainwashing the feisty crimefighter into a mindlessly obedient slave to their mutual mistress, Belinda. She and Bluebird were then outfitted with new uniforms and serve alongside Belinda as her person bodyguards, enforcers, and pleasure slaves.

As far as anyone can tell, Janice is in no way related to Aibell Duncan, another superheroine codenamed “Sparrow” who operates primarily overseas. Janice did spend a semester in Europe as part of her college curriculum, so it is possible that she was somewhat inspired by the more famous Legion of Superheroines member. She did, however, end up changing her public alias to avoid any unnecessary confusion with Miss Duncan when Janice’s own crimefighting career got off the ground… and after threats of legal action from some of the Legion of Superheroine lawyers.