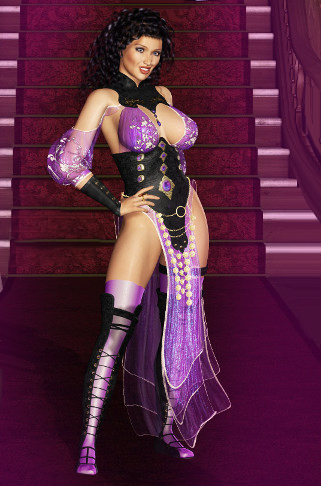 HISTORY: Esmeralda was born to a Romany (aka gypsy) traveler tribe that had immigrated to England. She grew up as a pickpocket and thief but moved on to confidence games and swindles as her natural beauty and charisma began to develop. She became involved in a plot to blackmail Lord Bertram Rayal with pictures of him sleeping with an underage prostitute, only to have those plans change when Lord Suss manifested and commanded Rayal to teach her magic.

Having little ambition of her own (aside from getting rich), she proved a perfect and eager pawn for the demon lord and his insidious cohort. She has “latched” on to Rayal much like one of her magic creations but so far her usefulness, skill as a mage, and youthful enthusiasm in bed has proven worth the drain in his time and resources.

To make herself seem more exotic and mysterious, she affects an Eastern European persona in public but in private or when surprised she tends to break out in cockney slang.

POWERS: Latch possesses a fair aptitude for the mystic arts but is relatively unschooled without a potent wizard as a tutor. She has “acquired” a few magic items including a ring that shoots bolts of fire until she finds such a teacher.

To make up for this Suss has given her the power to create magical leeches which can drain a victim of his energy and superhuman abilities, no matter the source. It’s possible that with practice she could expand the potential of these creatures to drain other attributes or even transfer what was stolen. Even without training, these are potent weapons allowing her to defeat superhuman opponents in seconds if she can get them attached (which usually requires either surprise or sleight of hand). Once the creatures attach to a person’s aura they are not removable by them using physical force or powers, though a strong human helping can rip one off of someone else.

Despite her lack of training she is a dangerous enemy, devious and sneaky with a fondness for underhanded trickery. She’ll probably fit right in in Metrobay.

APPEARANCES:  The Key to My Heart