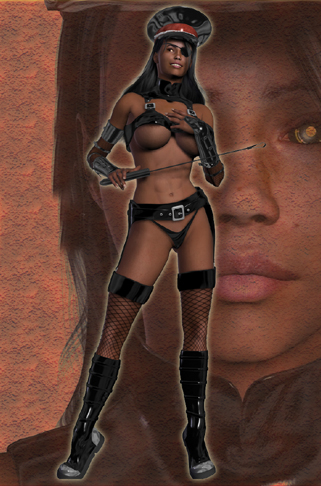 Donna Sergalli grew up in Grime City, always fighting for respect and her own safety. This hardened her and created in her a powerful desire to have control of every situation.

One day while out in the city, she decided to break in and rob an elderly gentleman to sell his possession for a quick buck. However, it turned out the man she stole from was a retired wizard, the same one that had blessed the Speed Demons with great abilities. However, her selfishness and greed forced him to curse her with a magical eye that, whoever gazed upon it, would submit to her, depriving her of any normal human interactions and forcing her to cover her eye to prevent her world from falling apart.

However, Donna came to enjoy the benefits of her “curse” and began to exploit this ability towards many of those she wished to dominate and control, fueling an ever-growing desire to dominate all men and women around her.

She eventually exploited her abilities to gain entry into the League of Villains, where she developed a very potent and keen rivalry with fellow mind controller Mindor the Mentalist.