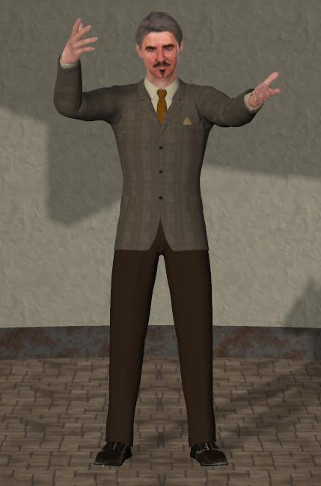 No one still alive knows if Bertram Rayal (Bert or ‘Bertie’ to his friends) was actually a noble but he was able to provide enough “proof” of his lineage in the 1850’s to take over the vacated title of Earl of Falmouth. A consummate wheeler dealer, he was a close companion of Queen Victoria and a behind the scenes influence peddler. He was also a member of several infamous ‘Hellfire’ clubs which could be considered precursors to the modern day ROPE.

As he grew old and infirm he sought various methods of staving off the Grim Reaper. A satanic ritual at one of the aforementioned clubs provided a chance meeting with Suss, a deity looking to expand his influence in the mortal realms. The godling provided Rayal with immortality, supernatural sexual stamina, and eternal youth in exchange for doing his bidding. To continue his life in the public eye, Rayal will often groom a dupe as his ‘son’ (even going so far as to sire a child) then have him ‘disposed of’ so he can assume the younger man’s identity.

Part of his services to Suss (and extradimensional entitites he’s had dealings with) involves teaching the craft to promising young mages. Not surprisingly he caters to a taste for attractive young women by having taken on a number of female apprentices. He’s been doing this for over a century now having been master of such luminaries as Sheridan Fox, Beautiful Dweomer, and currently the lovely Latch as well as many more.

Currently Suss has his pawn expanding his influence in the organization called ROPE as well as increasing hedonism and the use of magic in general, specifically in the city of Metrobay with the secondary goal of continuing the degradation of Divinia aka Invincible Girl. Rayal dearly wishes to ensorcel and wed the lovely Ms. Metrobay to have an equally long lived consort to share his perverted ways.

Bertram has been granted mystic immortality. Exactly what limits this entails or what conditions he must fulfill are unknown though it’s obvious he’s retained youthful vigor and sexual potency for well over a century and a half. He has no natural talent for magic but over the years has learned many minor spells including glamours to permanently alter his appearance and tarot card reading to predict the future. Likewise he has several lifetimes of study which grants him knowledge in subjects both mystic and scientific. His skill with people is uncanny (perhaps even magically augmented) and he exercises political influence anywhere he cares to. In R.O.P.E. lore his ‘ancestors’ are credited with being founding members and he’s thus accorded a great deal of respect, especially by the older peers.

Notable Appearances: The Key to My Heart, Sex Pets of the Wild West