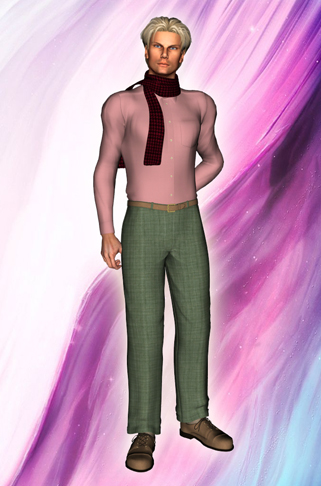 ABILITIES: Clothing alteration – By concentration, Inman can change any person’s clothes instantly into any other outfit he can conceive of. There seems to be few limits to his power within his purview: he once put Gadget Gal into a whipped cream bikini (causing all of her gadgets to change as well, rendering them useless) and Hot Cocoa’s jumpsuit into a lead vertugado (hoop skirt). He is a talented designer with extensive knowledge of fashion history and current trends.

HISTORY: No one knows how Inman got his powers or why they work; he was a designer of some repute who suddenly went mad one day at a showing in Metrobay and starting changing the outfits of the models into scandalously revealing fetishwear. He operated pretty much without opposition (anyone who threatened him got stuffed into metal reinforced bondage gimp suits) until Omega Woman took one for the team one day and fought him in the nude. Without her wearing clothes he could affect, the fight was short lived.

Inman did his time in the Fun House, declared cured by his psychiatrist, and was released; however no one would hire him given his reputation… until Emily Easton came to him after her TV show and asked him to design her the current costume she’s now famous for. He’s been working in her employ ever since.