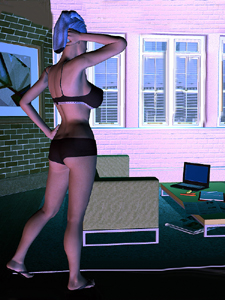 Like many in Metrobay, Alpha Woman lives in an apartment, which is located near Superheroine Squad Headquarters. It is a rather upscale apartment, one which would probably be beyond the budget of the average citizen, but which the co-leader of the Superheroine Squad can rightfully afford.

Alpha Woman now occassionally shares this apartment with her partner and lover, Valient Grrl, who at one time was under the control of Dr. Twisted as his human robot “RoboGrrl”. During this time, she snuck into Alpha Woman’s apartment and installed hidden cameras for him to spy on her before baiting her into his trap.

Alpha Woman’s apartment apparently lacks much privacy and is even loudly broadcast on the Superheroine Squad’s main map screen, an oddity that Alpha Woman herself points out.