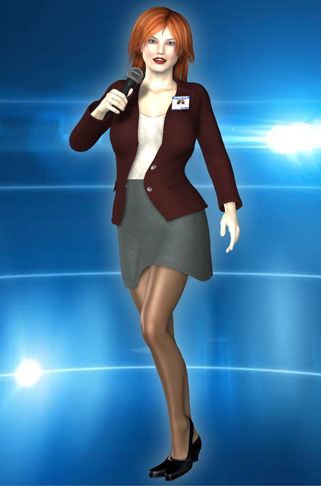 Cloris Perkins is an award-winning news reporter, journalist, and anchor employed by WDD. She’s well-known in Metrobay for cutting through the redtape and PR talks to dig up the dirt on hot issues and get the truth out to her viewers… a reputation that has earned her equal measures of admirers and enemies.

A rising star on television, Cloris’s coverage of many major events in Metrobay, such as the infamous “Night of the Drones” or the highly publicized opening of Von Ick’s secret underground vaults have made her a minor legend in the public’s eyes. She’s often referred to as the “most trusted news source” in the entire city and it’s rare for her to miss any major event, whether it’s the annual Miss Metrobay beauty pageant or the rigorous campaign trail of Mayor Turner. From entertainment to politics, Cloris is Metrobay’s go-to gal.

She works alongside fellow news reporters Janice Florenco and Janine Adair, with whom she shares a very strong kinship and journalistic rivalry with. Cloris in particular held a competitive rivalry with Janice for the scoop on big stories and has been disappointed that her former rival has taken a curious number of sick days and extended vacations, leaving her with less competition on the field.