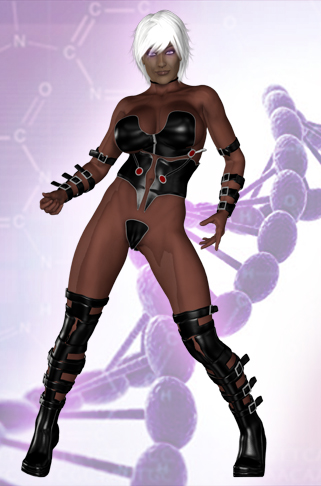 The creature that has come to call herself “Physique” is a creation of APEX Industries over decades of obscene and highly illegal genetic tampering and engineering.

Decades ago, the heroine Valiant Woman was captured by the depraved Feelix Von Ick, who sought to use the ageless and mighty heroine as a means to unlock the vaunted “superhero gene”, to help create his own army of genetically engineered super-soldier clones.

Over decades of research and testing, the comatose heroine was impregnated with a potent genetic soup of altered genes obtained from the strongest and most powerful beings in the known world. She later gave birth to twins, dubbed by the science team as Subjects 873-A and Subjects 929-X. While Subject 873-A was used as a means to focus attention to one specific power, super strength, Subject 929-X was created to be the ultimate lifeform, capable of acquiring and adapting to any power she came into contact with.

The scientists’ hubris, however, outstripped their means of controlling their creations. Subject 929-X grew too powerful too quickly and, without any mental conditioning implanted, went on a rampage throughout Metrobay, resulting in catastrophic damage and the apparent death of the heroine Yuri Lan. Deciding their creation was too powerful to continue research, but too valuable to discard, she was placed in stasis until a better means of control could be developed.

However, even that proved ineffective, as Subject 929-X merely grew more powerful, even in her stasis pod, until at last she was strong enough to break free from her shackles and escape APEX Labs.

Calling herself “Physique”, the confused and angry young woman has discovered her sibling escaped from APEX’s clutches long before her. For whatever reasons, she has launched a ruthless campaign against her twin, the heroine calling herself “Valient Grrl”. It remains to be seen if there is any heroine alive that can stop her.