Cybernetic Implants are technological modifications to a human body that are fully integrated into the human being’s anatomy as opposed to merely covering the exterior, as is the case with the Control Helmet or Control Collar.

One of the first known women in Metrobay to receive cybernetic implants was police scientist Marcy Smith. Instead of wearing a control device like the other robot women, Marcy has been implanted with special cybernetics that are more completely integrated into her body. They allowed Sentius and Marcy to interact with each other as if they ‘shared a brain’, which they kind of did… hers, of course. There were occasions when Marcy showed some independence (a side effect of her special programming) but for the most part she remained a loyal and obedient disciple of Dr. Twisted and existed only to carry out his orders until her free will was restored to her. 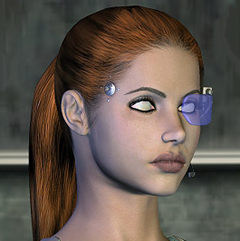 Head Implant
The most vital component of cybernetic implants, the head implant is a mechanical plug, usually located on the temple, forehead, or back of the neck, that establishes a direct neural link between the human brain and a computer.

This link allows an outside user to send direct commands to someone outfitted with a head implant, programming them just as easily as a computer. In fact, due to this link, the human brain could easily be considered an extension of this computer, as all images and experiences the subject experiences are shared with the computer. Inversely, the subject’s link to the computer in effect turns the human brain into an advanced supercomputer itself with access to terabytes of information at speeds and capacities impossible with the normal human mind.

The head implant also is highly adaptable and can be retrofitted with a variety of attachments and upgrades, such as scanners, cameras, and direct link component cables. The streamlined design of the implant allows allows for a far less conspicuous appearance.

Sentius later utilized a similar head implant template for his H.E.R. drone Controlunits, establishing a hive network amongst his converts. While a head implant is for the most part semi-permanent, it has been shown that careful removal is still possible.

Side effects of the implantation vary, with the most notable effects being rolled back (“whitewashed’) or glowing eyes during asserted control, a slightly blue tint to the lips and skin, and rigid posture, all of which can be modified or hidden with minimal effort. 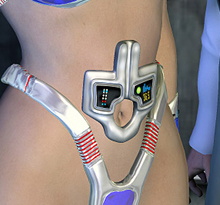 Should any of these biological functions need attention, the stomach implant sends a signal to the head implant alerting it of the issue and the head implant will in turn instruct the host to seek appropriate measures to return the body to a normal and stable state.

It is possible for the stomach implant to impose otherwise unnatural physical states as well, such as increasing or suppressing hunger, increasing sex drive, and other computer-imposed modifications. 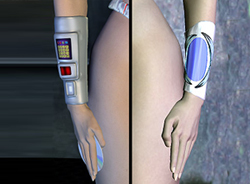 Wrist Implants
The wrist and arm implants serve a similar purpose as the stomach implant except they monitor a subject’s pulse and blood pressure.

The wrist implants are also highly adaptable and can serve as an ever-present PDA and external computer link. The left wrist implant can also display limited holographic images as well.

The wrist implants also can be utilized as offensive weaponry, capable of generating small but strong electrical shocks, and are able to hack a wide variety of computer equipment and hardware. They also serve as a strong conduit of Silver Satin’s technopathic abilities and alternative link between herself and computer equipment.

Epidermal Implants
Epidermal Implants are purely external sheets of microcircuitry that use electrical impulses to control the subject’s central nervous system and therefore guide their every thought and action. They are also able to stimulate the nerve endings of the sections of skin they cover, enabling enhanced senses of touch and heightened arousal. Epidermal implants are also able to cover and bond with optic nerves, and focused electrical energy can result in a potent “eye laser” capable of stunning or seriously wounding a potential threat.

Epidermal implants are linked together and kept active by a central computer. Upon its deactivation, the sheets of microcircuitry can be removed very easily.