Androids, or human-shaped robots, have become a staple of the workforce in Metrobay and an example of APEX Laboratories’ technological skill and ingenuity. These machines routinely perform tasks too dangerous for normal human interaction and regularly serve as security against threats that are often inhuman and superpowerful. 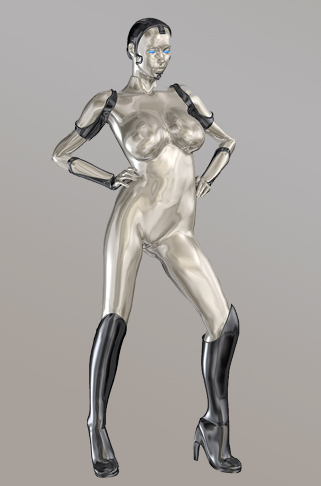 Mechana Prototype
The Mechana Prototype is a “gynoid” robot, a female figured robot. It is constructed of a solid steel skeleton and a pliable chrome surface for “skin”. The prototype was created by Belinda Giolla after Ted Twiss drunkenly confessed a sexual preference for female robots and some tech boys made a crude female template to poke fun at her.

The Mechana prototype, or APEX Unit 001, was originally designed to be a security android, but was later modified by Belinda and reprogrammed as her personal bodyguard and sex machine. As a result of “Project: Metropolis” the prototype was upgraded with the combined physical and emotional characteristics of Belinda, Valient Grrl, and Ms. Metrobay and given a more human appearance. 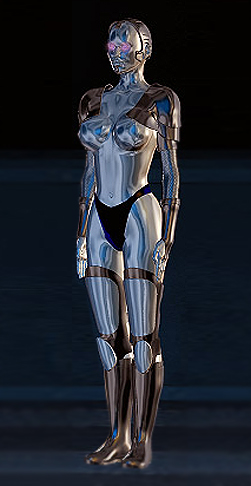 APEX Unit 002
These upgraded androids are the mass-produced versions of the Mechana Prototype, designed almost exclusively for security and defense, though retaining their feminine shape and features. They are more heavily armored and physically imposing than their predecessor, though their mobility suffers by comparison. Their artificial intelligence is also vastly reduced as a control measure after Mechana’s advanced A.I. began to rebel against its original programming. 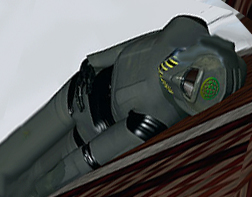 APEX ELITE SENTRY
The Elite Sentry robots were supposed to be the most advanced, offensive combat droids on the market. Designed by APEX to be walking battle tanks, they excelled at both short term offense and defense. However, they proved ineffective against the likes of superpowered heroines such as Valient Grrl and their bulky frames and limited A.I. made them poor alternatives to the sleeker, faster, and more advanced models that followed.

INFILTRATION ANDROIDS
Infiltration Androids were developed by APEX and Feelix Von Ick to blend in seamlessly with normal human beings. Able to effectively mimic human speech and behavior, the models could be further modified to resemble actual human beings, who could then be replaced with the programmed machines. It is so far uncertain whether or not these are in fact actual machines or cyborgs, though the absence of necessary human physiology such as a flesh-and-blood brain seems to suggest the former. 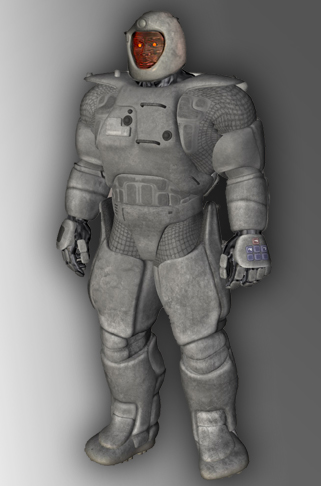 SENTIUS
After the intelligent computer Sentius was thought to be destroyed, he was rebuilt using APEX technology into a hulking, near unstoppable battle android, a larger and more powerful version of the Elite Sentry. He was outfitted with heavy armor, a metallic skeleton, and even high intensity laser weaponry and a mobile H.E.R. ray beam.

DOLLS
The “dolls” are creations of Gilbert E. Petto, utilizing his own designs accompanied by technology borrowed from APEX Industries. Unlike most of the more recent androids, dolls are intentionally devoid of many emotional traits in light of the recent rogue activities by Sentius and Mechana who rebelled against their own creators. Dolls, however, are capable of using limited “personality” characteristics converted to raw data, which are often obtained from the brain scans of various Greentooth Earpiece wearers. The appearances of the dolls are highly realistic, since they are often created using advanced scanning and replication technology to directly mimic the physical characteristics of the individual scanned. However, their artificial skin has a noticeable plastic sheen to it, and their eyes are usually a pupil-less glowing blue, making their integration into mainstream society more difficult. 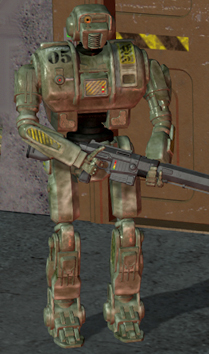 SERIES-5 SECURITY DROIDS
The Series-5 Security droids are the fifth generation of advanced military-grade androids produced by APEX. They replaced the outdated Elite Sentry models and incorporated elements of Sentius’s hardware and software, as well as A.I. programming from Sentius and the Mechana templates. This has allowed the Security droids a greater degree of flexibility and resourcefulness on the battlefield, as well as limited individuality, but they remain heavy restricted and monitored in their field deployment. Their armor is bulletproof and almost indestructible, and many of them carry large laser cannons capable of emitting short, stun bursts or powerful and deadly force blasts. Apparently, their programming was coded by Belinda Giolla, who saw fit to give them a limited amount of personality, at times dropping one-liners or using pop-culture references. 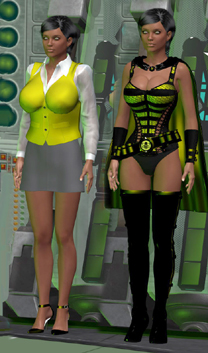 NANO-CLONES
Advancing the technology of Gilbert Petto’s Dolls, the nano-clones are robot copies of specific individuals created by Terra Creed. However, they possess a malleable layer of artificial skin composed of nanomachines that directly copy the DNA properties of the targeted individual, resulting in a significantly more lifelike and natural looking robot. However, due to the vast amount of power and energy it takes to run millions of small micro-machines at once, Nano-Clones have a very short shelf-life, limited versatility, and almost none of the strength advantages present in other models. Many might consider these cutbacks worth the trade-off for lifelike realism, however.