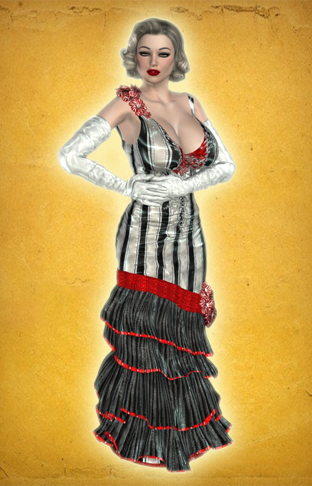 Lucille Luck is a resident of Hooter County and granddaughter to one of the most famous moonshiners in the country. True to her family lineage, she inherited the family business and made a sizable profit selling the horded stash of wine and liquor her predecessor illegal bought and stored.

Her family has owned and operated a shady saloon for generations, which was the venue used to disperse their ill-gotten gains. Lucille inherited it when she was of age, but she also inherited her family’s rivalry with the established tavern owners, the West Sisters.

While the West Sisters were upstanding individuals whose kindness and friendliness brought them many customers, Lucille catered to the opposite sort of clientele. She gladly indulged the many crooks, drunks, and lowlifes that frequented her joint, and it wasn’t long before her siren song called in several more.

Lucille also had a gift, a special ability that caused any and all to gravitate towards her and seek her favor. Lucille was able to see a short ways into the future, a power that enable her to see the outcome of sporting events, card games, and gambling machines before the outcome could be decided. Using this ability, she won huge wagers and helped rich, wealthy men win high-stakes gambles for a portion of the profit. This ability she hid from public knowledge, leaving many to call her “Lady Luck”.

Lady Luck then began a profitable criminal enterprise, using her fortune-telling abilities to see the outcome of confrontations and to discover the skeletons in rich men’s closets. Hiring a gang of superpowered thugs, she began bullying and pressuring people to give in to her demands, to pay her blackmail money, and to keep her living in the lap of luxury.