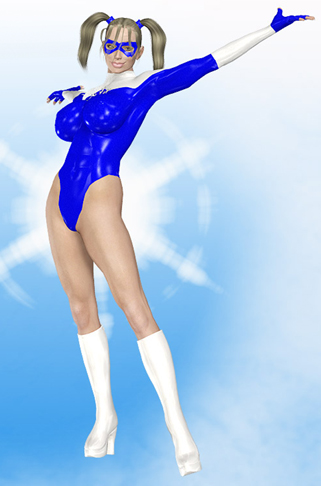 Snowflake discovered her superpowers in her late teens when she accidentally put her high school boyfriend in the hospital with a severe case of frostbite. Her parents forced her to hide her strangeabilities, ashamed that their daughter might be some sort of genetic freak.

It was only after Kyla witnessed the Superheroine Squad capture a sadistic killer that she realized she could be proud of her abilities and could use them to help others.

One day Alpha Woman and Valient Grrl visited Metrobay University, where Kyla is a student, to scout potential Superheroine Squad members. Kyla was one of the first girls to join the new junior heroine program, codenamed “Grrl Power”. Alongside her roommate and close friend Solaria, Snowflake investigates crimes around campus while remaining a full time student and reserve member of the Superheroine Squad. 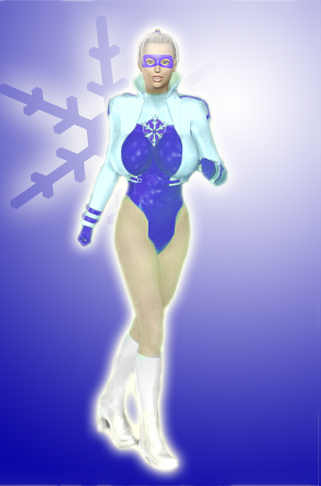 Snowflake has already had her fair share of misadventures during her young crimefighting career and has had notable run-ins with various villains such as The Boyz, Noctrissa, Changeling, and Sentius.

Kyla was one of the many heroines captured and enslaved by Sentius during his attempt to control Metrobay. She was subject to the hypnotic seduction of a mind controlled Alpha Woman and was designated as her ‘slaveunit’, rather than a traditional ‘controlunit’ like the others. She was later freed from Sentius control by the Superheroine Squad and has since returned to active duty.

Following that misadventure, Kyla was later duped by the fiendish Dairy King who, feigning a broken cooler for his ice cream, lured the gullible heroine into dropping her guard, allowing herself to be chloroformed and kidnapped. She was injected with a highly concentrated thrallium-extract and hooked up to a milking machine, where she discovered her pert breasts now produced ample loads of milk. This, combined with her natural cooling abilities, resulted in a unique blend of liquid Dairy King hoped to put to good use on the market. A distraught Snowflake remained in his possession until the milking machines malfunctioned attempting to milk Ms. Metrobay. This freed Kyla, who used her powers to stave off an impending and deadly explosion. She holds the somewhat unfortunate distinction of being the only heroine aware of the entire sordid series of events.

Recently Snowflake was discovered at the apartment of Officer Mick Jones, much to the surprise of his apparent girlfriend Hypnotica. Assuming the two were having an affair, Hypnotica confronted them, but when the argument turned sour she hypnotized Mick and Snowflake and inadvertently had them pleasure her mindlessly for a few hours. Hypnotica made her getaway, leaving a confused, and undressed, Snowflake and Mick behind, where Valient Grrl stumbled in on them. Whether the two were indeed a couple or not was never clarified, but while Mick denied it, Snowflake did insinuate that she and Mick held some attraction towards one another. She has also stated that there is a “guy she likes”, which could possible be Mick.

She and Valient Grrl then split up to find the culprit responsible and a confused Snowflake ran into catburglar Troublina, mistakenly believing her to be responsible. However, as she attempted to take Troublina back to the station, she stumbled upon Hypnotica and Valient Grrl together. Troublina successfully bartered for her and Hypnotica’s freedom in exchange for leading them to the main criminal responsible: Max Indeks.

The foursome successfully journeyed to APEX Industries and snuck inside, discovering an active cloning facility, as well as uncovering the startling revelation that Hypnotica and Valient Grrl are listed as clones in the computer database. Hypnotica wound up brainwashed and used her hypnotic powers against Snowflake and the others. Snowflake awoke naked at Metrobay University alongside Solaria.

After the encounter with Hypnotica, Ms. Metrobay and Omega Woman decided that Snowflake needed more training and control. She was trained vigorously by Valient Grrl and partnered up with Jade Lightning, as well as demonstrating talents and tricks taught to her by RollerGrrl. While out on patrol with Jade Lightning after a successful crime bust, both women were abruptly sucked from Metrobay to the world of Platinum Earth where they were branded as intruders by the personnel stationed there. The heroines of this universe cautiously grew to trust their unexpected guests, but Snowflake remained rather distant, uncertain, and afraid. While investigating a portable that may have been able to send them back to their original dimension, they were ambushed by individuals brainwashed and augmented with cybernetics. 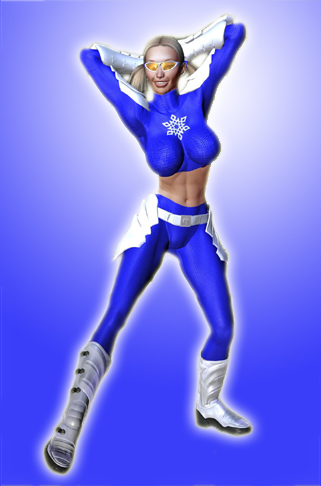 Fleeing from their assailants, Snowflake and her friends barricaded themselves in an empty lab room and stumbled upon a power suit designed to augment the ice powers of a Platinum Earth heroine. Snowflake herself volunteered to don the gear to give them a fighting chance against their attackers and when the opportunity came found her enhanced powers vastly increased to almost catastrophic levels. On the way to lift the lock-down, they were ambushed by the powerful Skullcrusher. Snowflake and the heroine Stylet opted to stay behind to buy the others time. Though she put up a brave fight, the duo were defeated and brought before their leader, Ultimo.

In a moment of weakness, Ultimo convinced Snowflake to betray her new friends in exchange for a way back to her home dimension. An emotionally devastated Snowflake personally enslaved Stylet while Skullcrusher and Piranha seduced her into joining the Aegis Foundation. While in bed with them, they implanted her with an inhibitor device to suppress her morality and conscience and guarantee her loyalty. She was then willing to assist Ultimo in stopping her friends from hindering his schemes. 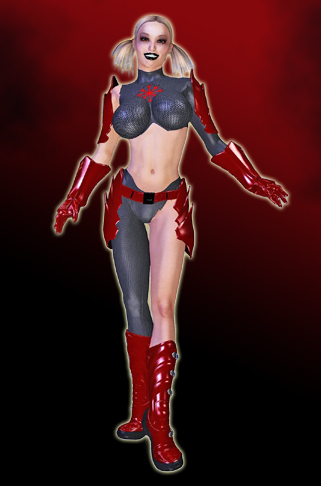 She’s attempted to do just this, attacking her one-time mentor Jade Lightning and trying to prove that she was capable of “saving” the day on her own and returning them all home. When her conscience began to get the better of her, the inhibitor device seized control and redirected her thoughts towards her misguided actions. When Valient Grrl and Alpha Woman wound up as Ultimo’s captives, however, she rebelled. In return, Ultimo directly removed all free will and thought from her mind, leaving her a mindless, obedient shell.

Snowflake managed to break free from the inhibitor device upon seeing her friends used and abused by her evil compatriots. She turned against them and took them on in single-handed combat. While valiant, and successful, in her attack, she was impaled through the stomach and apparently killed in action. It was to her fortune that the alien Arzentium race intervened, healing her injuries and restoring her comrades to their proper minds. A remorseful Snowflake then made amends with Stylet, who left her her control mask as a reminder of both her weakest and strongest moments beside her. After this, Snowflake returned to Metrobay with the rest of her team.

Following her ordeal in Platinum Earth, she and the others have attempted to pick up where they left off. Snowflake has made light of the situation and it seems her bubbly personality has returned. However, recently her powers have begun to fluctuate beyond her control. She and the others decided to rest up at the Sunny Side Resort and reconnect, thought more sinister forces awaited them there. While there, lingering trauma from her ordeal in Platinum Earth caused her psyche to split into an “Evil” and “Ideal” side, manifesting whenever she slept or became unconscious. While she dealt with this, the villain Ring Mistress began capturing her friends and turning them into nano-dolls to auction off to R.O.P.E. bidders. Snowflake instead managed to solve the mystery, overcome the nanomachines in her body, and defeat the robotic Nene Heaters, while harmonizing her split psyche. The experience left her with an unexplained photographic memory, but otherwise she emerged unharmed. 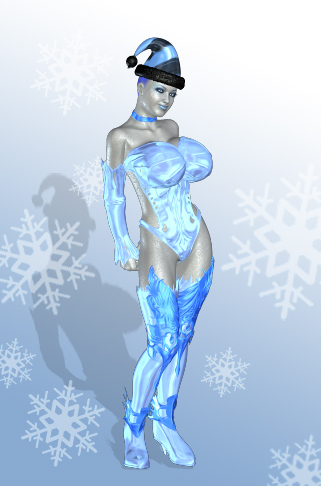 Snowflake was turned evil once again when she came to rescue the heroine Invincible Girl but instead wound up possessed by the evil Black Hat, who turned her into her “evil” counterpart, Frostbite and merged their psyches. They quickly have begun a new cold-themed crime spree in Metrobay with little awareness or regard towards her former comrades.

Snowflake tends to make friends rather easily, being very outgoing, energetic, and at times bubbly. She is best friends with Solaria, despite their polar opposite powers and personalities. She has also developed a strong friendship with Blackout, who looks up to Snowflake for inspiration despite her own youth and inexperience. Snowflake also tried to be a mentor to Spellweaver, though Spellweaver is generally regarded to be the more competent crimefighter. Snowflake also frequently hangs out with Valient Grrl and it is implied she may have a small crush on her captain Alpha Woman as well, though this could in part be due to Alpha Woman’s recent power fluctuations. The only person she’s maintained a heated relationship with is Troublina, whose catty disposition delights in poking fun at Snowflake’s imagined intellect and weight problems.

Despite her skills and experience, she remains highly suggestible, naive, and gullible, and has often found herself in trouble for not fully understanding certain situations. She hates to be called a “dumb blonde”, but the moniker is not without some merit. She did not even think to wear a mask to hide her secret identity until several of her classmates, including Mick Jones, realized who she was. Luckily, her blunder was discovered before too many people realized the truth and she quickly adopted a mask to compliment her frost-themed costume. Counter to her lack of common sense, she has demonstrated being an expert computer hacker, able to penetrated highly classified APEX firewalls in a matter of seconds. She is also a notorious shop-a-holic, mallrat, and party girl and frequently goes clubbing with Solaria and Blackout on weekends.

Powers
Snowflake’s frosty-themed abilities have often come in handy. She is capable of emitting sub-zero temperature blasts from her hands and can freeze criminals in their tracks in solid blocks of ice. Her ice powers are enough to create almost unbreakable sheets of ice and she can even directly influence the surrounding environment, able to lower temperatures of small areas and even cause it to snow in enclosed spaces. Her powers can even keep wild fires at bay, though high temperatures often negates her powers and melts her ice projectiles.

She’s been shown to use her ice powers to create almost unbreakable shields of ice to protect her body and can travel quickly by sliding across ice tracks and bridges she can create in front of her.

She’s often humorously been shown to use her cooling powers on herself if she gets too hot and aroused at times. Unsurprisingly, this happens often.