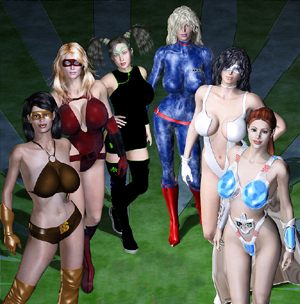 Metrobay’s legendary Superheroine Squad is actually a semi-autonomous arm of the Metrobay Police Department, with its captains Alpha Woman and Ms. Metrobay conferring with both Mayor Turner andChief Coleman on many important police matters yet still functioning as an independent unit. The Squad makes its home in the Superheroine Squad Headquarters, a multi-story state of the art facility occupying the top few floors of a skyscraper looming over the venerable 21 Street Precinct in midtown Metrobay.

The Squad was originally the brainchild of young heroine Gadget Gal in 1946, who organized and started the group with four other members, pledging to keep the peace and apprehend criminals that the average cops couldn’t handle. The Squad has grown over the years to now include more than two dozen full-time, part-time, and associate members from all walks of life and backgrounds, each with her own skills and expertise that she brings to the table.

The modern day Superheroine Squad also boasts a number of auxiliary units, each loosely affiliated with the main group in one way or another. There is Grrl Power, a team of college-age junior heroines assigned to the campus of Metrobay University; the Action Cats, an association of feline vigilantes led by the famed Pink Pussycat; and the Speed Demons, three rogue crimefighters who patrol the streets ofGrime City on their enchanted wheels. There is also the elite spy team known as the Agents of D.E.S.I.R.E., whose members do not have superpowers of their own but have fought alongside many a Squad member in their day. While only Grrl Power actually reports directly to the Squad’s leadership, each member of all four side groups has enough respect for Ms. Metrobay and the senior Squad members that they will always answer the call should a need for their help arise.