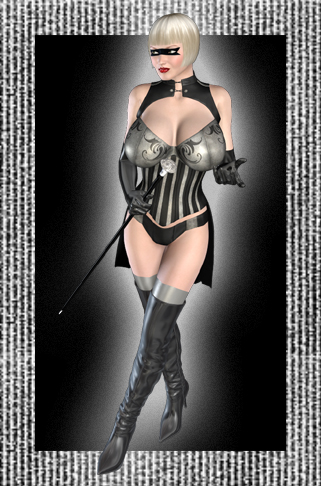 The Queen of Quizzes! The Royalty of Riddles! The Madame of Mysteries! Teri Pitchford is all these things and quite a bit more.

From an early age, Teri was obsessed with solving riddles and puzzles. With her brilliant acumen and knack for problem solving, she became one of the youngest members ever to join the Metrobay Mental Gymnasts Club, which permitted only the most elite and high-IQ recipients.

While mentally brilliant, she was emotionally immature and her brilliance soon went to her head. She began looking at her peers with disdain, feeling herself above them, and began devising riddles and puzzles to trip the other members up. Frustrated at their inability to solve her conundrums, she viewed the others as inferior to herself and quit the group, intent on seeking out a worthy mental challenger.

She soon began staging grand and elaborate crimes, leaving puzzles and clues for the authorities and heroines to find in the hopes that they might prove their worth. While initially viewed more as a nuisance than a legitimate criminal threat, the newly christened “MissTeri” began committing larger and more brazen crimes with even more elaborate puzzles and solutions, often involving hostages and more dangerous traps for the heroines to solve.

During one such endeavor, she stumbled across the villain Milla Second and the two colluded to begin targeting Metrobay’s students and faculty. Eager to test herself against a fresh batch of young and upcoming minds, MissTeri began scheming anew. She would find someone to challenge her brilliance, even if she had to enslave a whole dormitory or two along the way.