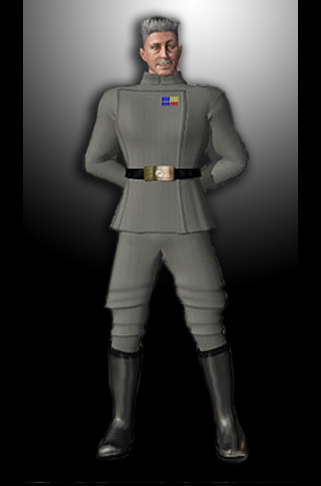 Boulevard “Bully” Lockhart is an old “war dog” general from the last great war. He originates from the year 2169 A.D. and has developed a reputation as a skilled soldier, as well as a man who routinely jeopardized his life and the lives of his fellow soldiers in order to get his mission accomplished. He is also known for his rather dry sense of humor.

After the war, Lockhart joined Metrobay Central Investigations as a reconnaissance agent, routinely cracking down on shady slavery rings and unethical experiments, often conducted by APEX Industries. After several years, he moved up the ladder to the rank of commander and was transferred to the top-secret organization Time Command.

Time Command was a secretive groups designed to combat pan-dimensional crime across the time stream, a task that risked the very fabric of reality. Commander Lockhart was in charge of this organization and orchestrated many operations to maintain order and tranquility across time.

His latest assignment involved sending Inspector Cross to the late 19th century to thwart the schemes of Draven Ophidian and to reacquire and arrest the rogue agent Sheridan Fox. While the mission was successful, it inadvertently helped assist Draven in masking his own immortality. Thinking he died as mortal, Draven was allowed to manipulate events behind the scenes and, ironically enough, became the faceless head of Central Investigation.