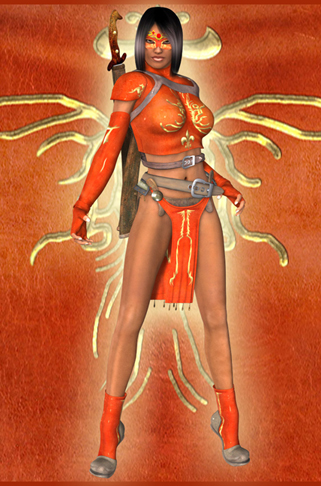 Amra Goswami is a powerful and righteous heroine who hails from India. Dubbed “the exotic flower” by her village, as a young child she discovered she could commune with the spirits of the animal kingdom, summoning them to do her bidding.

Her village was poor, and under the grip of a mad crimelord who exploited her people and resources. She and her family endured the abuse of the crimelord and his lackeys, all while she secretly grew in power and influence. Finally, she reached her breaking point and summoned a stampeding horde of elephants and lions to drive the crimelord and his organization out of the village.

Her village praised her and heralded her as a goddess incarnate. With her powers, she felt the urge to travel to other places, other cities, to liberate them from crime and oppression.

Eventually, her travels led her to the city of Metrobay, a cesspool of corruption and crime. Amra’s work to clean up the city has only just begun…