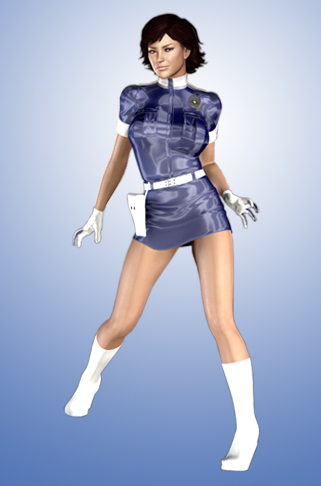 Margaret “Maggie” MacGilleycuddy grew up on the mean streets of Metrobay’s Grime City, often forced to take care of herself and her many brothers and sisters while her working-class parents held down multiple jobs in order to make ends meet. After graduating near the top of her class at Metrobay University with a degree in criminal justice, she enrolled in the Metrobay Police Academy, looking to help protect the decent folks who live in her old neighborhood.

Maggie has received several citations for her excellent service, and serves as a part-time instructor at the academy while not out patrolling her regular beats. Her reputation is well-known through theMetrobay law enforcement community, as she has taught or worked with many fellow cops such as Crissy Tanner, Erica Donovan, and Marcy Smith. She is currently the partner of Daisy Sanchez and a good friend of Jenny Han. She’s roommates with police investigator Phoebe Carlton and a good friend of private detective Iram Fitzpatrick.

Maggie is one of the more prolific and adventurous cops on the force, and one of the few that prefers jumping into the midst of confrontations while most would stand back and let the Superheroine Squadintervene on their behalf. While this has earned her the respect and admiration of both heroines and fellow officers, sometimes Maggie bites off more than she can chew. Nevertheless, she has emerged from encounters with Noctrissa, Spideretta, Lavendara Daze, Madame Mynx, Frank Einstein, and Blindside unscathed.

Despite her gumption and professionalism, Maggie is not above a little fun and naughtiness. Like many of her fellow female officers, she harbors an unrequited crush on her boss, Chief Coleman, but she’s also flirted with Officers Mick Jones and the hero Adonis. She has a loving, if difficult, relationship with her youngest brother, Shawn, who she views as a slacker.

Ultimately, her good fortunate, natural charms, and proficient skills have driven her to become one of the best cops on the force, and she won’t rest until every last scumbag tainting her city is behind bars.

Maggie recently was converted into a graybot by a robotized Fabiola Mendes. Maggie, in turn, was instructed to convert another, and secretly built a conversion chamber at her home before springing into action and enslaved her roommate, Phoebe. Despite this activity, though, Maggie returned to work in the police department and seems unaware of what happened to her and her friend.

Maggie has a brother, Shawn, who unknowingly is dating the heroine Goldwing.

Notable Appearances: Protect and Serve, Purple Haze, Musk of the Mynx, A New Drone in Town