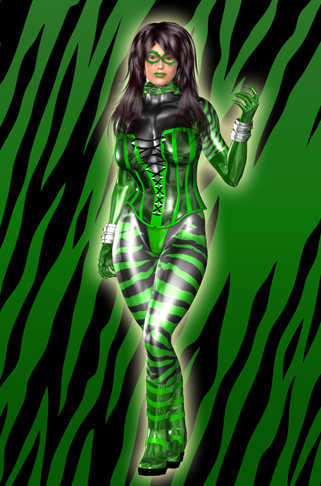 Rebecca Rogers never had a normal childhood. She was the daughter of the legendary heroine Kat Krusader and the infamous Masked Merc. She never knew her father, but she soon developed super human abilities similar to his own, including retractable claws, enhanced senses, and improved strength and endurance. She knew of her mother’s identity as the Kat Krusader growing up, even though she had long since retired to raise her as a single mother. Rebecca begged her mother to train her, but she was refuted.

Nevertheless, she found a mentor in her godmother “Aunt Sarah”, the heroine Duality Dame. She was trained in secret and forged a lasting bond with Duality Dame, coming to view her as her idol and practically a second mother. After their training was discovered, her mother relented but Emerald Tiger became discouraged at constantly fighting low-level street thugs and minor crooks, longing for the dangers and excitement of the big city.

She got her chance when her mother was kidnapped by Baron Von Vile and had to join forces with Duality Dame and Golden Girl to rescue her. While there, she was confronted by the anti-hero Shadow Lynx, who teased her with ties to her past and to her father.

Afterward, she became involved in the Unity invasion. Her mother was captured and converted into a Unity drone and forced to convert her personally, turning her into a mindless human robot dubbed “Unity Beta”. She was ultimately saved by Jupiter Justice and a group of other heroines during a rescue attempt and restored to normal.

Emerald Tiger was dragged into Duality Dame’s centuries-long battle soon after, and despite a brave and courageous struggle, fell victim to its taint. She was possessed and used against her friend in combat, but even with her strength she was defeated. Duality Dame then sacrificed herself to save her friends, leaving a distraught Emerald Tiger behind.

Emerald Tiger remains extremely hotheaded and feisty, a trait she inherited from her father. This aggression, and her animal-like traits, have warded off several potential boyfriends and has a habit scaring boys out of the bedroom due to her frightening temperament in bed. She has grown close to fellow heroine Jupiter Justice, who also was raised in a superhero family. She is also pen pals with Metrobay crimefighter Valient Grrl.