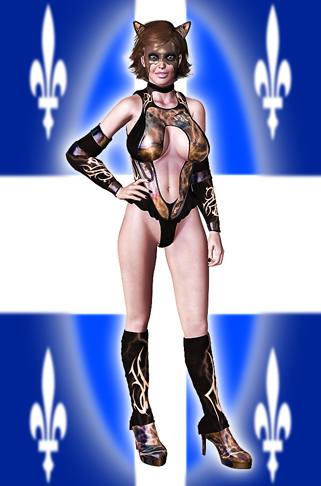 Cecille has always had a yearning for the fashion industry. Born in the Quebec province of Canada to an upper-middle class family, she inherited a silver spoon attitude in her upbringing. Enabled in every way, she felt entitled to anything and everything she sought after. If it behooved anyone else to get what she wanted, it didn’t matter to Cecille. Nothing would stand in her way. The boys she grew up with wanted her, desired her. The girls were jealous of her zeal and possessions. They passionately hated her, yet secretly desired her world. Back then, she never met something or someone she couldn’t have.

As she became an adult, she grew bored of the social life in her community so she strove for something more. That more would be the ritzy life style of the elite of the Metrobay fashion scene. On her 21st birthday she moved to Metrobay and became a fashion model. After learning the scene and putting in her time – it was the only time then she ever did any work – she decide to make her move on the elite.

She wanted to be the best. She wanted to have the best. She needed to possess the top spot in the spotlight. But to be and have all that, she needed to eliminate the one that stood in her way – Ava Lapette. Scheming and planning for a few years, she finally had enough insider information, clout and fashion to outshine the rest of the field to get to the same stage as Ava. Then, one fateful evening at Metrobay’s top fashion show, she caught wind of the dress Ava was to wear. She quickly intercepted the dress and presented it before Ava could react, forcing Ava to wear secondhand items.

She continued to find ways to outdo Ava at the next few elite shows, stealing the spot light away from her. But, that didn’t last long. Unbeknownst to Cecille, Ava was the vile & masterful R.O.P.E. henchperson – Madame Mynx. In a matter of days, Mynx undid everything Cecille had done and at the next fashion show confronted Cecille on stage.

Terrified by Madame Mynx’s presence and barely escaping the villain’s grasps, Cecille fled Metrobay and the fashion scene altogether. Fearful that she would be traced back to her childhood home, she fled to Capital City. Having to start over from scratch, there she began rebuilding herself and her lifestyle.

Because of her fashion expertise, she was able to get a job working the perfume counter at a local mall department store. The income coming in from that job was enough to get started but it wasn’t enough to get to where she wanted to be. Relying on her experience in the limelight, she realized how easy it would be to steal from the elite in the city. She started off easy, working the clients of her department store, then the clients of the other stores in the mall. Once she had her skill down she began to look into cat burglary. She was able to garner a more decent apartment and lifestyle from this activity but was also able to lie low in case word might get out to Mynx of her presence in Capital City.
As her heist progression through the ritzy neighborhoods got better and better she decided to make a name for herself. She created a fashionable outfit and a moniker, Calico Cougar, to match her stealthy prowler personality. She began leaving calling cards at every heist she committed. The police were baffled and she gloried in that. Little did she know that Capital City’s vigilante, American Amazon (then known as Freedom Broad), was hot on her trail.

One fateful evening, Freedom Broad caught a break and was able to get a step ahead of Calico Cougar. She lay in wait at the cat burglar’s next target. As Cecille entered, the heroine confronted her, not with force but information. Because of her work as the Federal Intelligence Agent, Anna Creech, she was made aware that Calico Cougar was indeed the same Cecille Chauntel that went missing in Metrobay. Through her Superheroine Squad connection, she was also aware of Cecille’s plight with Madame Mynx. She offered to help Cecille if, in turn, Cecille would help her.

To keep a finger on the pulse of the criminal element, Freedom Broad needed a sleuth to investigate the seedy side of the tracks. Cecille fit the bill. So, the arrangement was made. Cecille accepted the deal and was exonerated from her crimes. She began working with the Capital City heroine until Paula Revere – a.k.a Freedom Girl – came along.

Powers
Cecile has no special powers. When she was younger, she knew the importance of being in superb physical shape for modeling and took up various forms of martial arts. This helped increase her agility and footwork. She now possesses the skill to prowl without detection and catch targets unaware or her presence. This skill aided her in her career in cat burglary and now helps her as a sleuth.