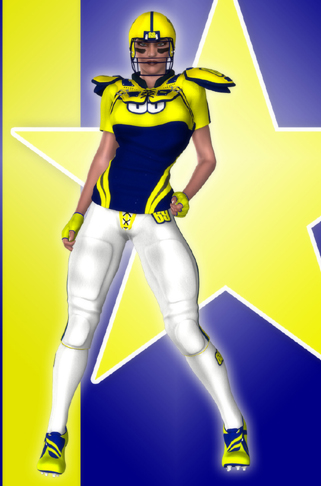 Bianca Bolton grew up with six other football-playing older brothers in a family that worshiped the sport. A tomboy by nature, she had no problem jumping in and playing football right alongside them.

When she got to college, she was told she couldn’t play football for the Metrobay University Wildcats because she was a girl and wasn’t tough enough, and was told to be a cheerleader instead.

Rather than listen, she stole a uniform from the locker and sneaked onto the field, impressing everyone with stellar plays, scoring several touchdowns and demonstrating superhuman displays of athleticism. She was discovered as a girl and promptly kicked off the field and banned from football, largely due to humiliating all the other male players with superior skill.

She kept her uniform, however, and decided to apply her super-athleticism towards fighting crime as the sports-themed heroine Gridiron Girl.