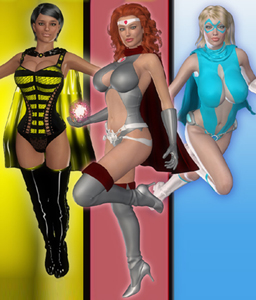 The Guardian Gals are a splinter group faction of the Superheroine Squad established by Squad veteran Valiant Woman. Valiant Woman had spent many years away from Metrobay to familiarize herself with the world outside of Metrobay and concluded that a new, specialized team was needed to combat the crimes and evils that fell outside of Metrobay jurisdiction. She recruited the fresh young heroine Gallant Lass and received funding, support, and equipment from self-made heroine Honeydoll. Together, this small band of heroines deals with more secretive and particular assignments than the rest of the Superheroine Squad and have quickly risen in prominence due to their recent successes.