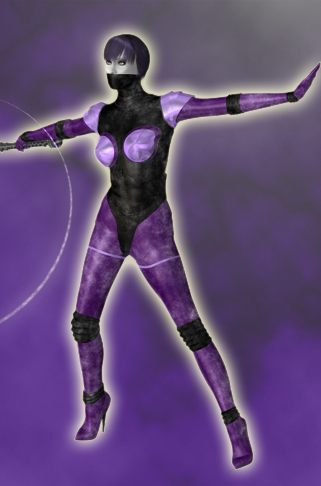 Violisha is a Chinese-American criminal under the employ of gang lord Vermin. A trained assassin under his new empire in Metrobay’s Chinatown section, she quickly rose through the ranks to become a second-in-command and a chief enforcer of his will.

Her rise or prominence quickly ended when Max Indeks barged in and took over their business, casting Vermin out and merging the clan with his Circle of R.O.P.E. Feeling Violisha could still prove her worth, Max kept her around and even gave her a special energy whip that possessed a powerful ultraviolet energy. Not wishing to suffer the same misfortune as her previous master, she worked hard to earn Max’s favor, but also to stay ahead of her competition, using her ninja training to become a shadow information broker to the criminal underworld.

She was recently seen attacking Mayor Turner in a staged battle designed to discredit the Guardian Gals and cast the villainous Heartthrobs in a heroic light.