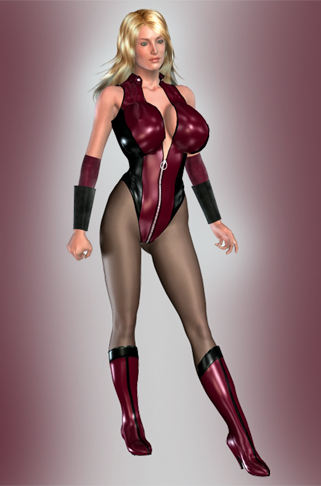 Ms. Metrobay is a current co-captain of the Superheroine Squad and is famous (or perhaps infamous) around town for allegedly having the largest breasts in all of Metrobay.

When Kelly West entered into her teenage years, it was discovered that she possessed the unique ability to draw energy from the world around her. This steady influx of energy gave her body superhuman levels of stamina, virility, and fortitude. Once she reached her twenties, and the peak of her powers, the aging processes slowed considerably, giving what today is a nearly ninety-year-old the beauty and physique of a woman decades younger. It also allows her to absorb otherwise dangerous blasts of energy, such as stun beams or powerful lasers.

Ms. Metrobay led the Superheroine Squad for decades before abruptly resigning her post one day and disappearing without a trace. Little did anyone know that she was being held captive in the fortress that is APEX Laboratories, a helpless victim of Belinda Giolla’s evil mind control machine while investigating claims that APEX had been continuing illegal cloning experiments.

She served Belinda dutifully and obediently before she was used as a template to help create the android Mechana. During this time she was rescued by a similarly captured Valient Grrl, ironically the very clone she originally was caught trying to verify, and helped lead the charge to rescue the other heroines during the events of “Twisted Tales“, though not before she and her former mistress had been turned into cyborg slaves by the rogue A.I. Sentius. Thankfully, her regenerative powers enabled her to fully recover from her ordeal in a short amount of time.

Ms. Metrobay was then brought back to active duty and took up the position of co-captain of the Superheroine Squad. It was revealed that she is actually the biological mother of Alpha Woman as well, with whom she shares the leadership position.

Ms. Metrobay later helped assist in the defeat of the resurrected Sentius, though not before she herself was captured and enslaved by her hypnotically manipulated daughter Alpha Woman. She then mindlessly assisted Sentius in the acquisition of fellow heroines Pink Pussycat, whom she had request help from, and her long-time best friend Omega Woman. During the aftermath, her unique DNA structure helped assist in reverting the robotically modified girls to normal. 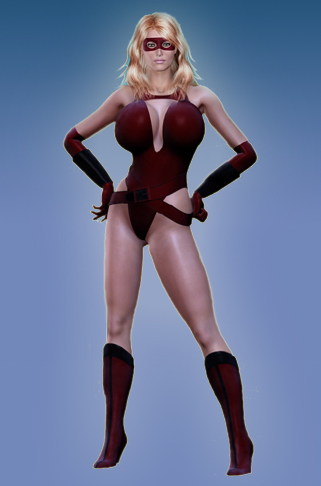 Her storied past with Omega Woman and the Superheroine Squad was revealed in the pages of “Original Sin”, where it was told that Ms. Metrobay was originally a farm girl from Hooter County who came to Metrobay to compete in a beauty pageant hosted by R.O.P.E. Unfortunately, the pageant was a ruse by R.O.P.E. to kidnap beautiful women and brainwashed them into mindless slaves of Kikka Brust and Feelix Von Ick. Fortunately, she was warned of this by Trudy Goodheart and the two made an escape attempt, hiding out at Trudy’s apartment. Despite this, Kelly was tracked down by two “Zombots” and outfitted with a mindbender headset. Ironically, Kelly was also declared the winner of the beauty contest and named “Miss Metrobay”, which ultimately became her crimefighting handle.

Ms. Metrobay was then used, along with the future Valiant Woman and an enslaved Kikka, in an experiment that ultimately resulted in the creation of Omega Woman, who was artificially given superpowers after their genetic material had been extracted and infused into her body. Omega Woman joined Ms. Metrobay and the others as an obedient slave to Feelix’s whims until Trudy, in the guise of “Gadget Gal”, managed to liberate them from his control. 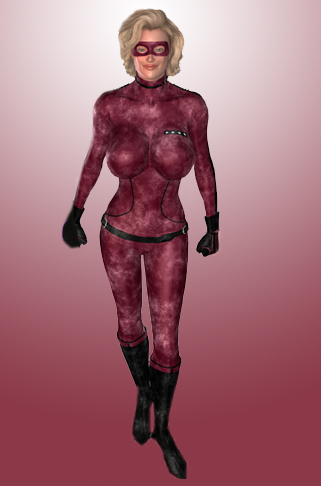 Trudy then convince Kelly to join her and helped form the original Superheroine Squad, seeing an opportunity to use her powers to help protect her adopted city from others like Feelix and Kikka.

Ms. Metrobay was recently used as the physical template to create a line of realistic, lifelike dolls by her friend Gilbert Petto. However, she was unaware that he was being blackmailed by Max Indeks and the android clone was taken back to APEX Labs, ultimately becoming the automaton MilkMaid, aka “LISA”.

Ms. Metrobay’s string of misfortune continued when it was sent on a mission by the brainwashed Mayor Turner overseas to investigate missing heroines. “mission” was really a R.O.P.E.-funded ploy to set her up. She was kidnapped and abducted by the Lambda Syndicate and held prison by their commander, the cyborg Echo, and her brainwashed slave Yvette. She was outfitted with a modified submission chip and mind controlled again. She was then packed up and shipped back to Metrobay in her catatonic, zombie-like state. She was sent as a “reward” from R.O.P.E. to the villainous Dairy King, a fellow Hooter County resident, and was reunited with her robot clone, MilkMaid. Snowflake later assisted in freeing her. 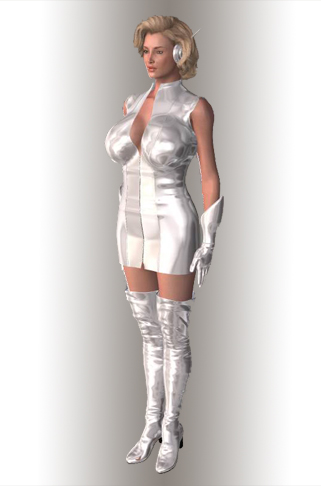 After MilkMaid was captured, she was held at the headquarters for study and put under Ted Twiss’s supervision. MilkMaid, however, has imprinted herself upon Ted as her new master and has picked up on the signs that he has affections for Ms. Metrobay. Seeking to please her new master, MilkMaid has set about brainwashing Kelly over and over in repeated attempts to turn her into her master’s ideal robot woman, going so far as to brainwash Trudy Goodheart into creating a sexy silver outfit for her to wear. Kelly has attempted to seduce Ted many times under MilkMaid’s influence, but Ted has resisted her advances for the most part, at times realizing that her mind may not be her own. Slowly but sure, however, Ms. Metrobay’s behavior has been guiding her into acting and thinking like a human robot slave. Kelly has slowly become more and more obsessed with the idea, even in her waking moments, to the point she has personally requested LISA to help assist her in fulfilling her fantasies. LISA has obliged her and Kelly has unconsciously found herself coming back to the labs late at night and being transformed into the mindless, obedient “Robotits”, her normal self unaware of her secret, second robotic life.

Also, unbeknownst to herself or others, her foe Kikka returned from beyond the grave as the dark witch Gothikka. Seeking revenge on the heroines that she felt wronged her, Gothikka ensnared and enslaved Crissy Tanner and used her to attack and capture both Omega Woman and Ms. Metrobay. The two women were converted into mindless zom-babes that served their dark mistress well, and she helped provide genetic material for the creation of Gothikka’s bride, Voltara, under Frank Einstein’s supervision. She was summoned once more later when Gothikka needed to reacquire her bride, but as of this moment, none of her slaves are aware of their servitude to such a villainous goddess and they go about their day ignorant of this fact until they’re summoned once more. 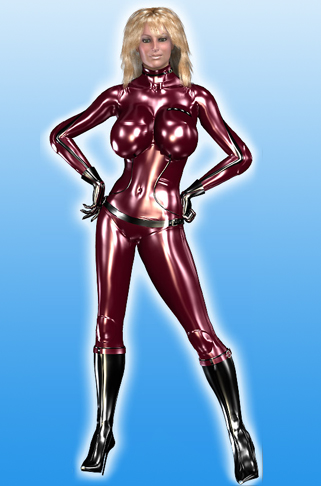 As alluded to above, Ms. Metrobay is well known around town for her rather large bust. Many a man – and some women – have fantasized about her stunning physique, leading to a small cottage industry of magazines and websites dedicated to the buxom bombshell. It was even implied that her time under the radiation reactor while held captive by Von Ick may have increased her bust a few inches more. While initially apprehensive about the attention she received, she ultimately came to view her physique with pride and self-admiration. In addition to her notoriety among big breast aficionados, she is also famous for her habitual costume changes, most of them in a desire to stay with the times. She has had upwards of a dozen or so uniforms throughout her decades-long tenure as a superheroine, but she usually retains her crimson and black color scheme throughout her many designs. There also exists the widespread, fan-created rumor that she’s a lesbian, but her own claims and sexual history, as well as the existence of her genetic daughter and husband, the former Alpha Man whom she visits often, seems to indicate this is nothing more than wishful fantasy. Brown Sugar also implied that she is not above flirting, or at least being friendly, with Ted Twiss, though MilkMaid’s manipulation has led the two to engage in a rather awkward and one-sided affair. This has not dissuaded many villains from using mind control methods to make Kelly engage in lesbian shenanigans, but the effects are typically brief and temporary. 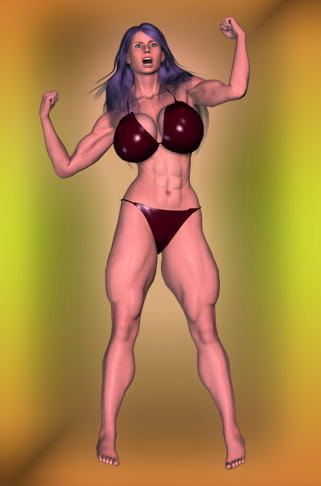 However, her very traditional and naïve upbringing has given both heroines and villains the wrong impression from time to time. While she has matured greatly with time, Kelly’s first experiences in Metrobay were troubling yet exciting, unaware of just how attractive she was or how pervasive crime and sexual deviancy were in the big city. While she has confessed to sexual experiences with Hooter County boys prior to her trip to the city, the sheer scale of rampant sexual situations present in Metrobay initially stunned her. It’s been revealed she is the youngest of four sisters, the others named Kathy, Kandy, and Kitty, and that back in Hooter County they had no qualms about sleeping in the nude, a practice she apparently continues to do to this very day. It is unknown if her siblings possess any superpowers, but it has been inferred they share her age-defying super genes as well. 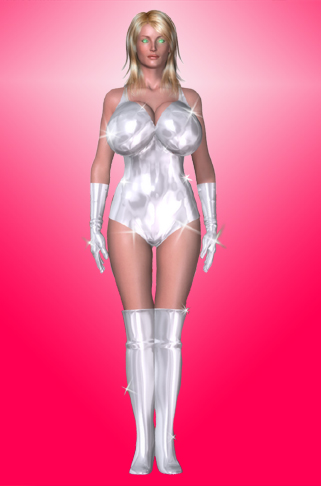 In her civilian identity as Kelly West she was known for her high-class restaurants and clubs, earning a small fortune with her entrepreneurial ventures. Upon her capture and brainwashing by Belinda, her businesses were sold to a dummy corporation run by APEX Industries. Upon her return she was unable to reacquire them due to the fact she had legally signed them over and current Metrobay law does not make special dispensations for legal contracts signed while under mind control. The Circle of R.O.P.E. and their corrupt legal system no doubt have a hand in that little loophole. Undeterred, Kelly obtained a stake in the ownership of the Double-D Diner, a popular venue for many superheroes and other law enforcement officers. One of her previous restaurant locations, Headlights, was given to R.O.P.E.-affiliate Vic Reno. Kelly had sent Brown Sugar undercover to investigate her old business to see if anything shady was afoot, but Brown Sugar was brainwashed into forgetting anything she saw there.

Kelly’s return to the spotlight after her kidnapping confirmed the public’s speculation that Kelly West and Ms. Metrobay were in fact one and the same. She has since forgone her secret identity and dedicated herself full time to running the Superheroine Squad alongside her daughter. 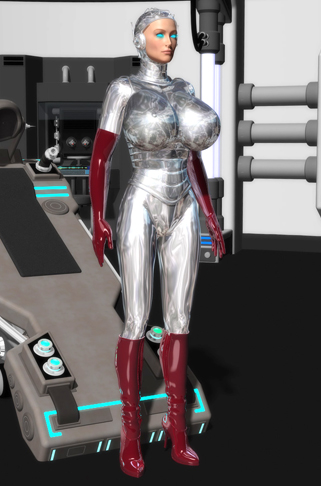 Ms. Metrobay’s most useful power is the ability to absorb the energy around her and redistribute it at will, which can make her a walking energy reactor or power battery if supplied with the appropriate source of energy. She can also absorb kinetic energy and friction, making her almost impervious to moderate blunt trauma or energized weaponry. An added bonus is that absorbed energy actually makes her stronger and healthier, greatly increasing her stamina and vitality.

This increase in vitality has also significantly slowed her aging process, almost grinding it to a halt at the peak of her physical development. She also has almost a century’s worth of experience and knowledge, making her an invaluable resource for fledgling crimefighters to turn to. Also, her body’s natural healing abilities have been significantly amplified, allowing her to recover from physical injury at a superhuman rate and to survive ordeals that might otherwise be fatal to other individuals. Ms. Metrobay’s powers are often seen to be activated either as a natural reaction or a conscious command and she’s been shown to be caught off guard and injured if unaware of approaching danger or if the attack is sudden and powerful enough.