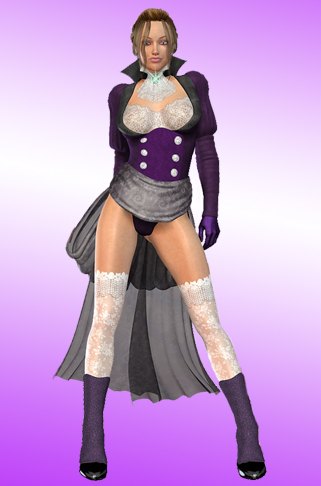 Ella Mesmer was one of Metrobay’s leading experts on criminal psychology, having devoted most of her adult life to the study of violent anti-social behavior. Her career goal was to understand what makes people go down the wrong path and give in to the darker side of human nature. She was so devoted to her profession that she even moved away from the big city to set up an office near The Funhouse, where she could either host therapy sessions or easily travel to see her patients.

Unfortunately, after years of dealing with some of the most depraved miscreants Metrobay has ever known for little or no recognition, Ella’s own mind cracked under the strain. She abruptly decided to leave her old life behind and start anew, wishing to partake in the naughty lifestyle that she worked so hard to help her patients reject. Utilizing a special hypnotherapy technique she enslaved Enchantress andSpellweaver, forcing the superheroines to bestow upon her a copy of their own magical powers.

Now possessing the combined magical abilities of both heroines, the resulting power she acquired helped turn back the clock and revitalize her sexy body, giving her the youthful figure of a woman half her age.

With a new look, and a new alias, Mesmerella began enjoying her new life as a celebrity magician in Metrobay, her legions of fans unaware that her famous stage shows are more real than they could ever imagine, a fact Omega Woman found out first hand.

Mesmerella is fairly harmless and isn’t look for any big trouble. While not necessarily evil, Mesmerella’s corrupted ethics and newfound abilities have nevertheless made her a powerful threat to theSuperheroine Squad, and only time will tell if her path down the road of villainy will continue. She’s been shown to enjoy playing with her hypnotic slaves, but treating them well, and has been revealed to have had some experience with other girls before, possibly alluring female patients such as Trixtress and Madame Mynx.

Mesmerella was recently kidnapped by the scientist Irene Webb and used, along with Super Freak, in an experiment to resurrect the dead Kikka Brust, draining her of her magic powers and instilling them into the resurrected and newly christened “Gothikka”. Mesmerella was briefly held captive by Gothikka and a freshly brainwashed Irene Webb, now known as Noctrissa, but then let go after they deemed her of no further use or value. Mesmerella returned home and promptly vented her frustrations on Enchantress and Spellweaver, including giving Spellweaver a magic-based “upgrade” to make her more attractive.

Mesmerella then began her performance, but midway through her show her magic powers appeared to fluctuate and get out of control, backfiring against her and putting her through embarrassing situations in front of her audience. She succeeded in making her assistants Spellweaver and Enchantress disappear was but unable to get them back, causing her audience to turn on her. She then tried to cast a spell to control and calm her angry audience but it acted against her, turning Mesmerella into a mindless slave. Her audience then made her strip and pleasure herself for their amusement, an act she did so without hesitation. She ironically earned wide critical and commercial success and praise for her “performance”.

Mesmerella emerged shaken, but physically unharmed, from her ordeal, and she was sought by Max Indeks to help break the spell Gothikka had placed on Voltara. Mesmerella reluctantly agreed, on the condition of being left alone, and for the price of new assistant/maid named “Fifi” who replaced the missing Enchantress and Spellweaver.

With the combined abilities of two of Metrobay’s most powerful sorceresses, Mesmerella may be one of the most powerful magicians of all. Despite being extremely inexperienced in the black arts, she has shown a robust dedication to perfecting her craft and quickly studied powerful spells. While the extent of her abilities may be limitless, she has chosen to use her abilities for more leisurely activities, focusing on spells that serve her stage performances or that allow her to enslave others to her will. Her powers have been shown to still be inferior in some respects to her predecessors and she was also unable to override Super Freak’s control on her own either. Her powers have also kept her looking more youthful and attractive than her given age would imply.

Recently, a large portion of her powers were siphoned into Gothikka, and the exact impact that has had on her abilities is unknown, though she appeared to have been left weaker, older, and less powerful until she could rest and recuperate.