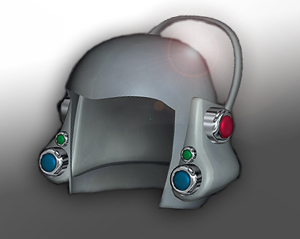 When Ted Twiss was employed as an APEX scientist he developed an obsession with researching and experimenting on the human brain. To that end he designed a series of computers and peripherals which could utilize a brain’s electrical charges to send and receive information from it. This led him to invent two very important devices, the M.I.N.D. (Mental Interface and Networking Device) and its close relative, the Control Helmet. It was the construction of these devices that ultimately set in motion the events that led Ted Twiss to become the spiteful villain that nearly destroyed the Superheroine Squad.

The Control Helmet, a modern marvel of technological achievement, manages to control the thoughts of a human being by interrupting normal thought behavior and “turning off” the human brain. In effect this leaves the wearer a thoughtless, mindless shell. The helmet then connects to a powerful computer, linking the brain with the machines and turning the mind into a peripheral of the computer itself. The computer is then able to send and receive signals directly from the cerebral cortex, bypassing many higher cognitive functions like memories, emotions, or personality.

A controller is then able to send his or her own programming into the wearer’s brain, essentially replacing their natural thoughts with artificial commands and instructions for the mind and body to follow. The wearer’s conscious self, however, remains entirely unaware of this process and is turned into, by most accounts, a living “human robot”. 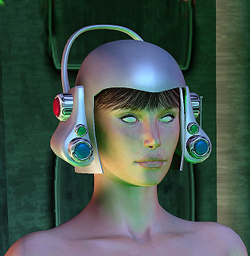 The Control Helmet possesses other features, such as wireless X-Band transmission capable of receiving instructions from a great distance, as well as advanced flexibility and compatibility with other software for upgrades and modifications. The Control Helmet is also susceptible to hacking and viruses, and interrupting signals can override normal programmed thoughts, leaving the wearer in a state of self-imposed “lockdown” until a strong signal can be re-established. Another slight disadvantage is that the Control Helmet requires a large amount of initial electricity to boot up and assert control, and frequent rechargesessions are needed to keep the helmet, and its host, up and running.

Side-effects of the Control Helmet notably include rigid posture and rolled back (“whitewashed”) eyes and a blank, emotionless face. Because of the limitations that the Control Helmet possesses in redistributing information to the wearer, a wearer’s actions and speech are often slow, deliberate, and robotic, furthering their association as “human robots”.

The Control Human was later upgraded into the more streamlined Control Collar in order to appear less conspicuous and cumbersome. Control helmets, however, were later used by Sentius on his normal H.E.R. drone slaves during the “Night of the Drones” incident.