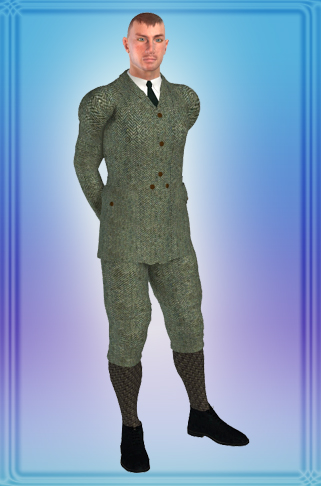 Alfonse Cornelius Quire was a dignified lover of valuable pieces of history and art. His home became a museum of fantastic pieces of historical importance and artistic merit, but the more he gathered the more addicted to acquisition he became.

Ultimately, his penchant for seeking out items of great value and importance got the better of him and he began to steal and horde items from a local museum in his native England. His thievery was discovered and Alfonse was forced to flee to America, seeking asylum in the city of Metrobay.

Tagging along with him was enough priceless works of art and peerless historical heirlooms to make him a king several times over in many smaller countries. Using this wealth, he quickly established himself as a dignified socialite and became the curator of the Metrobay Museum of History and Fine Art, which was in actuality a gallery of his own personal collection of artifacts. With his wealth and prestige, he was quickly invited into the Circle of R.O.P.E., finding a home with the other wealthy scumbags of the city.

It wasn’t long, though, before the itch arose to again seek out the most valuable and priceless items on the planet. But this time his focus turned towards even more sinister goals and rewards. Alfonse decided that the nothing was more valuable, desired, and scarce as the superheroines that protected the city. At first he began stealing their belongings, a power belt here, a costume there, but it wasn’t enough. Soon he craved the very heroines themselves.

Alfonse got his first fix when the heroine Juris Prudence was caught snooping around in R.O.P.E. affairs and was dealt with by Madame Mynx. Put through the Modification Machine, Juris Prudence was brainwashed into compliance and given to Alfonse as his own personal superheroine wife and slave, reborn as Mrs. Janice Prissman-Quire. A talented lawyer, Janice used her keen knowledge of the legal system to help him find every loophole he could to get more belongings, including many that he had no right to take, and to bail him and any of his cronies out of Metrobay Prison should he ever get caught.

Notable Appearances: An Acquired Taste, Caught in the Headlights