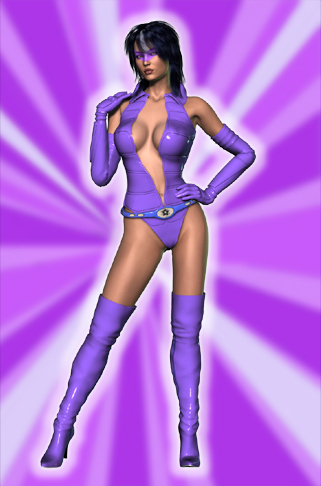 Violet Star is a relatively young and inexperienced heroine, yet has quickly established herself as a popular and capable crimefighter.

Sabrina Saxton, however, is a far more introspective and reclusive young woman, living alone in a modest apartment with only a housecat for company. She is a graduate student at Metrobay University and interns as a nurse at Metrobay’s Malroth Memorial Hospital, but is largely unfamiliar with most of the staff and has little active social life. Because she is a hopeless romantic who dreams of some tall, dark, handsome stranger who will sweep her off her feet, her high standards have led her to live a rather lonely life, despite her obvious charms and spellbinding beauty. 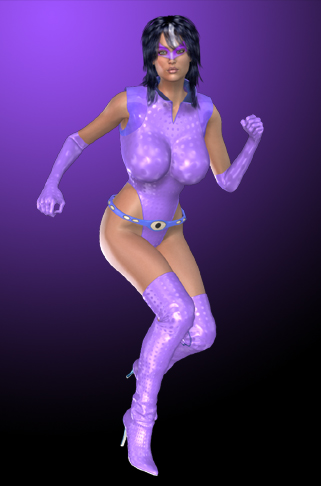 However, she gladly escapes her mundane life by donning her secret identity and fighting crime in the heart of Metrobay.

Sabrina’s poor social skills originally lead her to act as a solo operative, but she quickly drew the eye of the Superheroine Squad, who drafted her into their ranks after the events of the “Night of the Drones”left them in dire need of more members to patrol the city.

She recently was sent to resolve a hostage situation involving the villain Lavendara Daze and Officer Mick Jones. While she was briefly able to gain the upper hand, she became distracted by the handsome Mick, dropping her guard and allowing Lavendara to hypnotize her into her thrall. While under the villain’s control, Violet Star was forced to release all her pent-up inhibitions and mistakenly viewed Mick as her lover and soul mate, despite his muffled pleas to the contrary. Ultimately, Lavendara Daze escaped capture, leaving Violet Star to have her way with Mick until Officer Maggie MacGilleycuddy arrived to remedy the situation. It is uncertain, however, whether Lavendara Daze’s mind manipulation has left any lingering influence on Sabrina, such as her affections toward Officer Jones, though it is reasonable to assume she at least returned to her timid, prudish former self once she had spent enough time away from Lavendara’s evil influence. 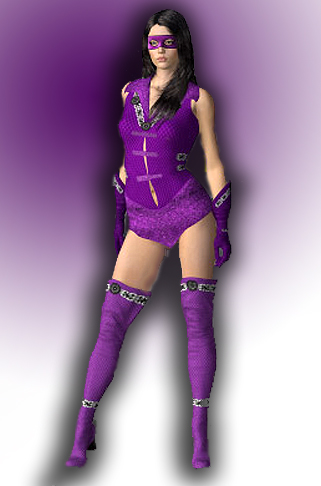 Powers
Violet Star utilizes a special energy ring that enables her to quickly transform into her superpowered alter ego. This ring is the source of her powers, imbuing her with enhanced physical strength and endurance and the ability to harness and manipulate light and photon energy along the ultraviolet spectrum. Violet Star is able to use these abilities to blind and stun opponents and can channel her powers into powerful concussive blasts of ultraviolet energy. Her enhanced physical endurance also greatly reduces the impact of toxins and poisons, though she is still susceptible to airborne chemicals and sedatives.