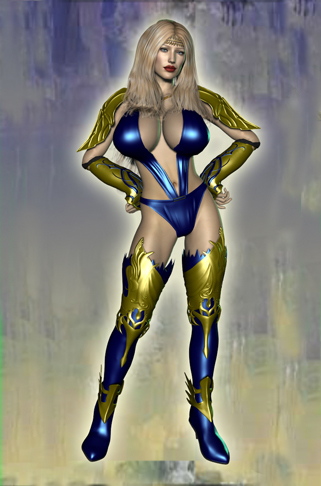 The Amazons of the Isle of Neoleuke are renown fighters and skilled strategies, but all pale before the power and abilities of their goddess’s chosen herald, Virtua.

Bestowed the title of “Warrior Maiden”, Virtua has been blessed by their matron deity with enhanced strength and longevity to forever protect her homeland in times of need. For thousands of years, she has guarded their unspoiled isle from the outside world, intent on preserving its autonomy and divinity from any corrupting outside force.

However, such a grave responsibility has also trapped Virtua on her island home, keeping her from following her heart’s desire to venture outside the island to search for the true heir to the Amazon kingdom… her long-lost sister, Valaya.

Cut off from the outside world, Virtua remains unaware that her sister not only still draws breath, but has become the powerful heroine Valiant Woman. She is also the aunt of the young crimefighter Valient Grrl. Perhaps one day she’ll be reunited with her estranged family… but only once the goddess of her people permits her the leave of absence so desires.

Until then, Virtua will continue to protect her kingdom, a dutiful soldier who would give up everything for her goddess and her people.