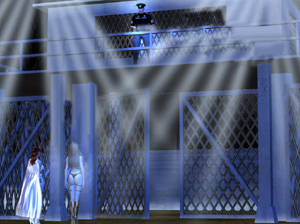 Metrobay Prison for the Criminally Insane is one of the more dreadful and imposing landmarks in Metrobay, a stone and steel fortress which confines the most depraved, deadly, diabolical, and deranged criminals to ever terrorize the citizens of this great city.

Located in the hills on the far eastern limits of Metrobay, nearly every costumed supervillain caught by the Superheroine Squad has done hard time here. The Funhouse’s security used to be far more relaxed and lazy, resulting in many criminals making rather effortless and successful escape attempts. Upon Vanessa Turner’s election to the Mayor’s office, Marcia Smith was appointed as the Warden. She immediately cracked down on insubordination, beefed up security, and has a proven track record of keeping criminals locked up tight.