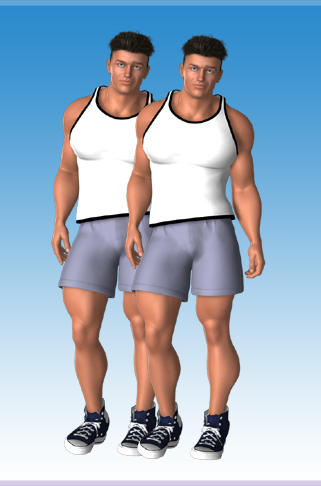 Douglas Diamonte was born and raised in Jock Beach, just north of Metrobay. Ever since he was a boy, he knew was destined for greatness. I mean, why not? He was good looking! Why wouldn’t he be great?

He shared this dream of fame and fortune with his sister, and the two of them hit the big time when they became prominent cast members on the popular reality TV show, “Jock Beach”. Famed for his abrasive attitude and chauvinistic personality, Douglas rode the hype train all the way to the major leagues, signing endorsement deals, raking in millions, and having a conga line of supermodels lined up to sleep with him.

While his sister thought she could be of better use elsewhere, and left for Metrobay, Douglas was content to ride out his fame and fortune. Like his sister, he was born with the ability to create a duplicate of himself. Unlike his sister, who could create multiple copies all at once, he lacked both the discipline or mental power to control more than one copy. But one copy was enough, and “Double Dude’s” amazing ability only helped boost ratings and impress lovers in bed.

His ability also enabled him to sign up with Emily Easton’s superhuman agency, and she was good at her job. Under her agency, his fame only grew.

Now in Metrobay, he’s looking to seek out some fun and ladies before the next season of “Jock Beach” starts filming. Maybe he’ll run into his sister, if he can tear himself away from autographs, sports cars, gorgeous women, or his own reflection.