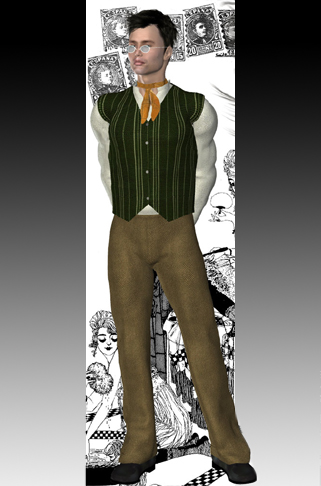 Woodrow was just four years old when his father, General Hazelton Strangecraft, was killed leading Union troops into battle. Woodrow’s mother died while giving birth to him, and upon his father’s death the boy became sole inheritor of the lavish Strangecraft estate. Without any family around, the boy was raised by nuns in the convent that was on the vast Strangecraft grounds.

Raised exclusively by females, young Woodrow was given a view of the world that his 19th century contemporaries refused to acknowledge. He would put his life in the hands of women for the remainder of his years.

Although his life was relatively short, the legacy Strangecraft left behind still affects Metrobay to this day. His legacy is split in two contradictory directions: scientific experimentation and the occult.

Strangecraft’s estate spread out over much of what is today the City of Metrobay. It was his dream to found a society of the future and he helped create a powerful scientific legacy. He brought in female scientists from all over the world to plan and develop the building of his utopian city-port. The scientists developed numerous innovations: an advanced public waterworks system, accessibility to electricity throughout the municipality, a remarkable health care and public nutrition program, and much more. Woodrow himself was the foremost scientific genius behind many of these research projects and experiments and were he content with just a life of science, he might have been regarded as one of Metrobay’s most brilliant men.

However, Strangecraft was also a noted and notorious occultist, spiritualist, and supernatural fanatic, often ranting and raving about visions and dreams while divesting a large portion of his time and energy into studying the mysteries of the beyond. His library was full of several tomes of witchcraft, demonology, urban legends and myths, and occultism, many of which had been thoroughly researched and marked by Strangecraft, expressing a rather unsettling side to the otherwise gifted intellectual.

Strangecraft’s dubious reputation resulted in his alienation from most social circles, a predicament he hardly seemed to mind. In particular, however, the fledgling Circle of R.O.P.E. grew to resent Woodrow. More often then not, he stumbled upon their schemes and practices, either due to experimental investigation or apparent dumb luck. Knowing his sphere of influence was limited, Woodrow helped fund the creation of a secret group of hand-picked elite female agents tasked with routing out the corruption of R.O.P.E. and exposing it to the world, in effect creating the Agents of D.E.S.I.R.E.

Strangecraft was either very brave or very foolish to attempt to confront R.O.P.E. head on in such a bold fashion, but at the very least he had to have known that there would be dire consequences. Strangecraft became withdrawn, devoting large portions of his time at his private quarters at the Strangecraft Lighthouse at Metrobay Harbor, and making few appearances elsewhere. Strangecraft was seen one last time in public, appearing sleepless and stressed, ranting and raving about monsters, prehistoricamazons, and mechanical people before disappearing for good soon after. Investigation of his lodgings at the lighthouse revealed a violent struggle, walls coated with blood and strange experiments seemingly destroyed in a rampage. The case was ruled a homicide, but Woodrow’s body was never found. It is still heavily believed his interference with R.O.P.E. dealings resulted in his untimely passing.

In addition to helping establish Metrobay as a scientific bedrock in the world, he was a noted philanthropist, helping to found Metrobay University, the Metrobay Museum of Fine Arts, and several housing projects near the harbor, which fell into disrepair after his death and became known as Grime City. He was also a noted collector of art and artifacts and many items found within his home dated back several thousand years.

It has been rumored that Strangecraft may have been clairvoyant, or at the very least possessed slight psychic powers beyond human understanding. He may have known extensive knowledge of spell-crafting and magic and was regarded as a skillful leader, organizer, and inventor.