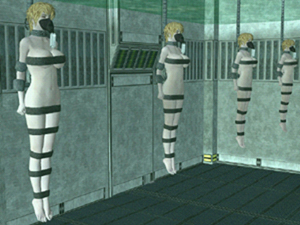 There have been several cloning facilities throughout history, though most are still relatively unknown.

One of the first facilities was created by Draven Ophidian of the Circle of R.O.P.E., secretly using the DNA from his double-agent assistant Emma Wickstaff to create several template clones, which he used to attract the interest of the Nazi party during World War II. The original facility was to eventually create an army of enhanced and obedient super soldiers based off of the newly discovered Valiant Woman, usingAgent Maven O’Riley as the template, but the facility was closed before the process could begin and cloning was declared illegal.

The era of cloning continued in secret at APEX Industries by both Feelix von Ick and Max Indeks, both using recovered DNA data from Valiant Woman to attempt to fulfill Draven’s original ambitions. This cloning facility was a heavily guarded secret and even high ranking members of R.O.P.E. were unaware of its existence. Ms. Metrobay caught wind of the cloning facility’s existence and attempted to investigate only to be brainwashed into forgetting by the Security Droid and Belinda Giolla.

The cloning facility was further put to use following the events of “Night of the Drones”, after data Sentius collected on a wide variety of Metrobay heroines and civilians was fed to APEX Labs for study and observation.