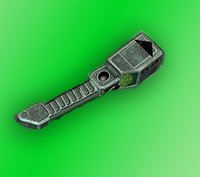 The H.E.R. raygun is a portable device capable of sending a high frequency optical energy blast at a target. The light it emits contains a powerful hypnotic signal that infiltrates the human brain, imprinting its preset commands and instructions upon the viewer’s psyche. In effect it modifies and mesmerizes the target it strikes, rendering the subject highly compliant.

The raygun functions by harnessing the radioactive properties of a small chunk of Thrallium which serves as the weapon’s power source. The device focuses the mesmerizing properties of the Thrallium into an intense beam of green light, which will completely overwhelm the victim’s mind in a matter of seconds. Victims have even expressed slightly euphoric feelings at being enslaved. 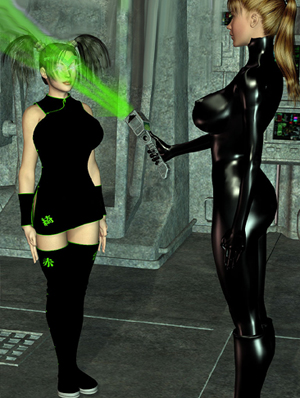 The H.E.R. ray has been designed to affect only females and has proven to be completely ineffective against male targets, perhaps due to biological differences in male and female brainwave patterns.

Side effects of the H.E.R. ray include high suggestability, stiff posture, and noticeably glowing green eyes.

The effects of the H.E.R. raygun are very potent, but also temporary, and will subside after a given time. They are easy to mask and hide, however, and the hypnotic signal can be hidden in objects such astelevision broadcasts and small optical dischargers like Sentius’s eye beams.