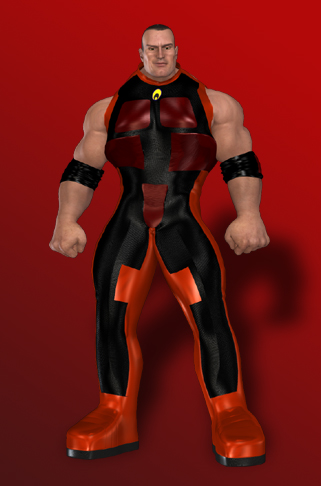 The resident powerhouse of The Boyz gang of hoodlums, Bronk is a typical dimwitted brute, but strong and tough as they come.

For a short while, Bronk enjoyed a very successful career as a professional wrestler and entertainer. However, his success came to a crashing halt when it was discovered he had illegally injected himself with various banned steroids, which effectively ended his wrestling career, banning him from the ring and shaming him forever.

Along with his disgraced managers/partners, Fingers and Dipstick, Bronk found employment with Max Indeks who realized he could easily manipulate the humiliated entertainers into doing various illegal odd-jobs and services for him in exchange for wealth and security.

Bronk then subjugated himself to strength enhancing process involving nanomachines and radiation, which increased his already impressive strength a dozen fold. With such raw power, Bronk is often the go-to guy for any mission involving his formidable physique.

Bronk’s superstrength has made him a popular thug-for-hire and he has been under the employ of many villains, such Enchantress, Madame Mynx, Max Indeks, and Trixtress, and he’s squared off against the likes of many powerful heroines. 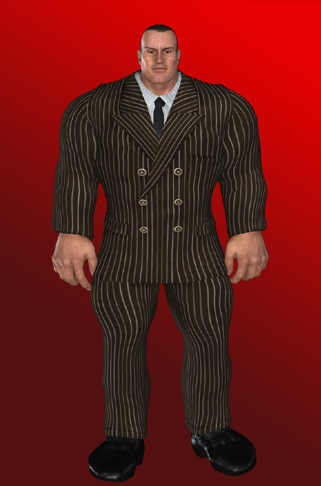 Bronk is easily able to handle a dozen men at once and can break through walls of solid concrete like tissue paper. Bronk’s huge muscle mass has left him at a slight disadvantage when it comes to speed, however, and he is easy to maneuver around and even easier to trip up. He has squared off against many legendary heroines and, though capable of handling many of them, his strength still pales in comparison to the likes of heroines such as Valient Grrl, Mechana, and Omega Woman. Despite this, he is a popular strong-arm for any villain to have around, if not for his actual usefulness than as a rather loud and large distraction from whatever plot his boss is concocting.