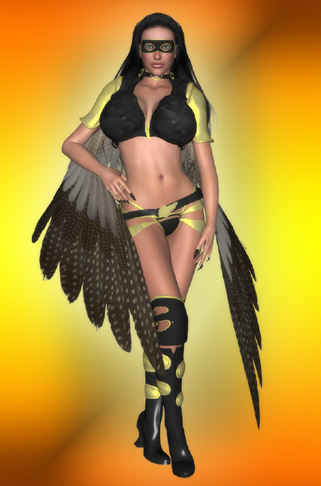 Danica Skye was once a normal girl, studying ornithology at Metrobay University.

However, she bumped into the wrong person coming home late one evening: the unethical and diabolical Doctor Tinker! Sadly for her, Doctor Tinker was on the prowl for more test subjects to perform her mad experiments upon. Helpless and afraid, she was quickly captured by the good doctor and wound up the latest guinea pig in her lair.

Like the heroine Hummingbird before her, Danica was yet another attempt to fuse her fine, feathered friends with human DNA. The procedure was deemed a “success”, mutating Danica and endowing her with strong, powerful wings, superhuman eagle vision, and sharp, deadly talons.

But it wasn’t enough for Doctor Tinker, who wished to further study her new creation and twist her genetics more and more until the human within become unrecognizable. Unwilling to succumb to such a fate, Danica managed to break free and, using her wings, quickly elude her captors.

It was while flying through the air that she bumped into Grrl Power cadet, Goldwing, who recommended she use her new abilities within the Superheroine Squad for the betterment of society. Stuck with her new wings, and unsure of how best she could blend back into society, Danica agreed, becoming the might Golden Eagle. She now helps patrol the skies of Metrobay, using her keen eyesight and great new powers to prevent any other citizen from becoming a victim as well.