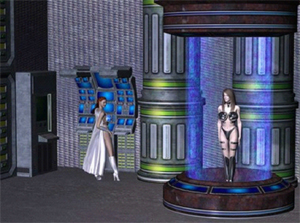 When Marcy Smith joined the Metrobay Police Department after her college internship at APEX Laboratories, the city and the Superheroine Squad built a high-tech crime lab within Superheroine Squad Headquarters for her to work in. It was equipped with the latest in crimefighting technology, and used to track down Metrobay’s population of supervillains.

Not long after the lab opened, its centerpiece was installed in the form of Sentius, a highly advanced artificial intelligence computer. Sentius was designed to assist Marcy and the police in bringing criminals to justice, but the intervention of Dr. Twisted changed all that in the blink of an eye. It was in the crime lab that Marcy was transformed into an obedient cyborg at the hands of a newly villainous Sentius, leaving the old “Marcy Smith” behind and creating the cybernetic being who would one day become Silver Satin.

Marcy has used her engineering skills and powers of technokinesis and technopathy to invent many new machines and devices, from energy containment fields to new age scanners to sleep-inducing stasis chambers. Following the events of the Night of the Drones, Silver Satin acquired an ironic associate, the reformed Ted Twiss, and the two have combined their scientific expertise to greatly benefit the Superheroine Squad ever since.