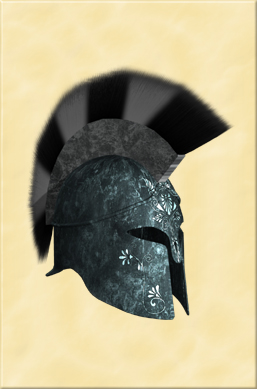 To put light onto the dark history of the Black Hat, one must travel back to the ancient age when magical Atlantis dominated the world. In those fabled times, the gods brought their celestial battles down to earth, among the mortals. Rival gods would choose human heroes to help raise arms against their enemies. Back then, the Black Hat was called the Black Helmet.

Avia and Xhish were two such rival deities. Avia was the bird goddess who stood for purity and justice. Her sworn enemy Xhish held sway shadows and serpents. For her champion of light Avia created the Cloak of Power, which bestowed the wearer with superhuman powers of strength and flight. To battle Avia’s champion Xhish created an instrument of corruption: the Black Helmet. It was worn by power-hungry queens and kings who thought the helmet’s dark magic powers would give them wealth and invulnerability. But Xhish made the Black Helmet a sentient object: one placed  upon a human’s head, the Helmet took control of that person’s psyche… making them the slave of the Black Helmet.

With this instrument of corruption Xhish could use one host human to corrupt numerous other mortals.

Over the ages, Avia and Xhish used the Cloak of Power and the Black Helmet in their eternal power struggle. Many humans donned the magic items in the course of their long and unending war. Below is a list of the known “hosts” ( or wearers ) of the Black Helmet who have been involved in Metrobay stories thus far.

Note that these entries contain spoilers for the Wicked Fun Park series. Readers should explore it before reading further if they wish to preserve the story’s secrets. 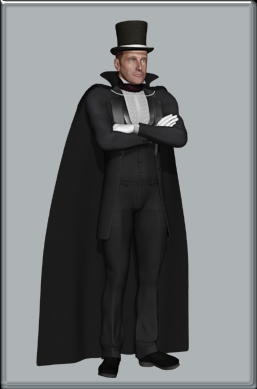 The year was 1892 and Lord Emerick Aimes was a British baron who moved to the United States to open his own trading company between Asia and West Coast America. He headquartered his business in Metrobay because of its optimal coastal location.

Lord Aimes was befriended by the mysterious Draven Ophidian. Draven seemed to know all the most influential people of Metrobay… Lord Aimes did not realize that he had been chosen by Draven to be the next host for the Black Hat. By this time Draven and the Black Hat worked closely together for well over a thousand years. When Draven came to Metrobay to form a new circle of friends he also brought along the Black Hat promising to find it a new host. With his wealth and influence, Lord Aimes made the perfect candidate.

At a high society soiree, Draven arranged for a drink laced with laudanum to be handed to his target: lulling Lord Ames to sleep sand allowing Draven to place the Black Hat on his head. In return, the Black Hat promised to subdue the troublesome Nightengale who had been thwarting Draven’s schemes. As it turned out, the Nightengale wore Avia’s Cloak of Power. The cloak and the Black Helmet would once again clash in their eternal battle of light versus dark.

The two rivals faced off many times, but finally the Black Hat gained the upper hand, capturing Nightengale and using his magic to transform her body and open a portal to another dimension. Luckily, Dr. Strangecraft managed to close the portal, separating the Black Hat from Lord Aimes in the process.

Strangecraft then locked the Black Hat away, and it remained untouched for over half a century.

Lord Aimes remained trapped in a new dimension  –  the world of Wonderland – where, suffering from a form dementia after so many years as a slave in his own body, he became an airship pirate. 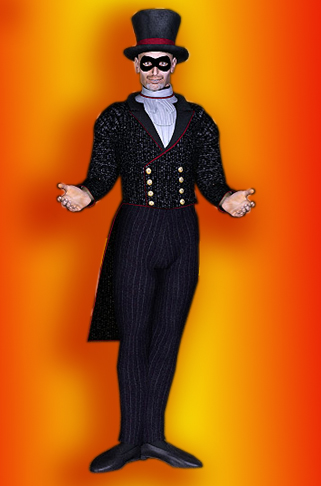 Alfred Hughes was a jack of all trades, master of none in early 21st century Metrobay. He spent the majority of his life going from odd job to odd job with little satisfaction or reward. Alfred often found himself strapped for cash: irritating friends and relatives with unexpected requests for money and long-term visits (often with no intention of repaying the debts).

He eventually found a job as a deadbeat security guard at the Metrobay Museum, though he proved highly ineffective at best. He often dozed off while on the clock, and many treasured artifacts under his supervision, such as the Magic Wand and the Cloak of the Nightengale, were stolen while he was either distracted or goofing off.

After his incompetence cost the museum a fortune in stolen goods, his managers had enough and fired him. On his last night, bitter and indifferent, he began to fool around with a few of the displays. At one particular exhibit of artifacts retrieved from the late Woodrow Strangecraft’s estate, he found a rather ordinary black hat. Alfred playfully put the hat on, curious to see if the legends of it being demon-possessed were true. Nothing appeared to happen, much to Alfred’s disappointment.

However, there was truth to the legend. Alfred wore the hat on for only a few moments before thoughts began to enter his head… thoughts he assumed was his own. Subtly, subversively, the Hat began to twist Alfred’s thoughts to match its own.

Alfred stole the hat that night, telling himself it was payback for his firing, and began to seek other means of making a living. His odd jobs grew increasingly dark: morally questionable, illegal, and often quite perverse. He eventually formed a small troupe of misfits and criminals and started a traveling circus. He and his Klown Krew began to scam and harass their way from town to town, robbing citizens and kidnapping unlucky “volunteers” from the audience for his and his cohorts’ corrupt amusement. By then, Alfred had effectively become the Black Hat.

Black Hat’s new crime spree did not last long, however. After returning to Metrobay and entertaining members of R.O.P.E., including presenting a bound Pink Pussycat to a delighted Max Indeks, His minions grew careless, allowing Pink Pussycat to escape and shut down the entire operation. Alfred took the brunt of the fall and wound up jailed at Metrobay State Penitentiary. (Control of the Klown Krew subsequently fell to the villainess Clownetta, who still leads that ragtag group of thugs to this day.)

Max Indeks eventually arranged for Alfred’s release. Impressed by his work ethic and corrupted mindset, he tasked Alfred to spy on R.O.P.E. for him, and the former Black Hat currently serves as the butler for associate R.O.P.E. member Dean Wickstaff.

Due to his lengthy term under the Black Hat’s control, Alfred’s mind remains quite corrupted, and he always appears more youthful and energetic than his actual age would imply. During his tenure as Black Hat, he also demonstrated several ‘magic tricks’ that may have either been elaborate stage theatrics or genuine displays of supernatural powers. 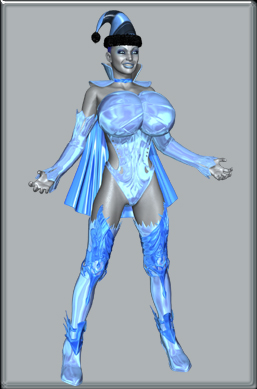 Snowflake was temporarily possessed by the Black Hat, who turned her into Frostbite. As Frostbite, Snowflake helped Draven round up superheroines to send to the Wonderland dimension. But Frostbite was trapped in Wonderland as well when Max Indeks destroyed  the portal the way Dr. Strangecraft did over a century earlier.

In Wonderland, the Black Hat was knocked off Snowflake’s head, freeing her of its possession with no ill mental effects.

After being knocked off Snowflake’s head, the Black Hat floated in the air, blown by the chilly ice winds before landing in the bedchjamber of the Ice Princess, Fridgitta. Having sucked energy from Snowflake’s superpowered body, the Black Hat could raise itself into the air and land on Fridgitta’s head, where it subdued the unsuspecting princess.

The Black Hat then transformed Fridgitta into Frostbite, who ensnared the superheroines Wild Orchid, Honeydoll, Snowflaker and Nightengale in her ice pool trap. She then took her captives to the castle of the Queen of Clubs. The Black Hat was eventually knocked off of Fridgitta’s head and landed on the head of transformed bimbo Winter.

Agent Summer was transformed into a busty, dimwitted bimbo by Frostbite in the Wicked Fun Park series. Ironically, the Black Hat would be placed on Winter’s head and its abilities subdued by the thoughtless bimbo host. The Klown Krew freed the Black Hat of Winter, but eventually the Black Hat once again remained a prisoner on the bimbo’s head.

The current location of the mythical Black Hat is unknown.

Powers
The powers of the Black Hat are largely unknown. Its magical nature is unstable and ever shifting and evolving as it jumps from host to host. It has displayed abilities ranging from cheap magic illusions to more extreme abilities such as teleportation, matter manipulation, and space-time displacement. The true extent of the Black Hat’s powers are unknown