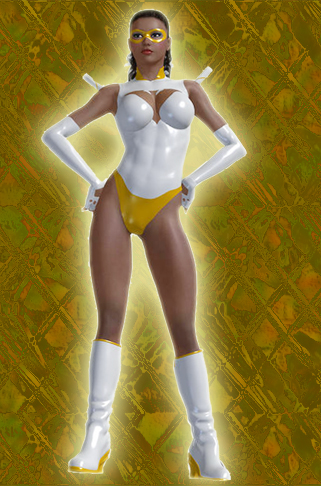 Glenda Jones appears to many as a cold and non-nonsense woman. She came from a low-income family and was never a very efficient student at school. Upon graduating high school, it was believed she’d join either the military or Metrobay’s police force.

Glenda shocked her peers by instead taking up a job as a security specialist at APEX Industries. To the surprise of many, she rose quickly through the ranks and APEX’s security breaches began to hit record lows under her supervision. Before long, she was head of all of APEX’s security defenses.

While there, she developed a powerful love for her APEX colleague, Preston Prescott, whom she admired greatly for his kind nature, keen intellect, and sympathetic personality. Sadly, her love was not reciprocated, and his heart beat for Pink Pussycat alone.

Being head of security, Glenda became privy to a large section of illicit and illegal APEX activities she was tasked with hiding from meddling eyes. For many years, it seemed APEX’s trust in her was well-placed, but Glenda wasn’t some soulless machine like the ones APEX could create.

Despite this, Peregrine’s past continues to haunt her. Her new teammates remain understandably wary of her loyalty, and she knows she has to earn their trust. She is legitimately sorry for all the harm she has done, which is complicated by her struggle to find a balance between keeping up the facade of her loyalty to APEX and her ability to use her position as security chief to tip off the heroines of APEX’s wrong-doings. Her heart is further conflicted by her infatuation with Preston Prescott, whom she still believes to be fully on the side of APEX, unaware of his own torn loyalties.

She has found support in the heroine Kitten, however, who had become close friends with the first Clawdette, herself a reformed thief, as well as with the current Nightengale, whose powers can see the purity of her heart and intentions.