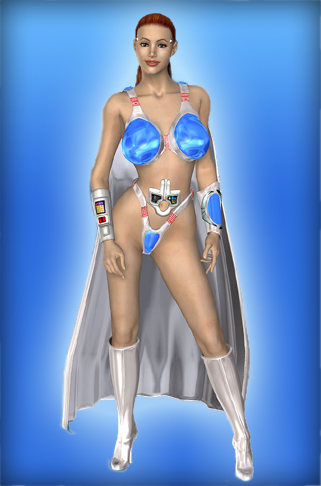 There is the old adage “Be careful what you wish for, because you just might get it”, and if anyone was to agree it would be Marcy Smith.

After graduating with honors from Metrobay University, Marcy began her career in law enforcement as a crime laboratory technician after she had finished her internship at APEX Laboratories, helping to construct the advanced computer program, Sentius.

After Sentius was transferred to the Metrobay Police Department to assist in solving crimes, it was a natural move for her to team with the computer in the department’s new information and technology laboratory. Much of her job involved working closely with Sentius to increase the computer’s understanding of how the human mind works, so that it might more thoroughly understand and assist the police in capturing some of the city’s most dangerous criminals. 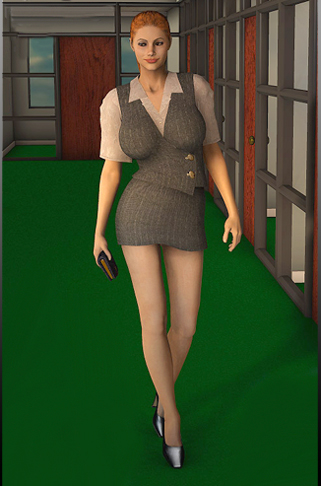 Marcy had long harbored dreams of joining the Superheroine Squad, but without powers was content to assist in the safety and security of Police Headquarters.

However, those dreams came true under the most unusual of circumstances when Marcy was captured by a corrupted and rogue Sentius and her body augmented with cutting-edge cybernetic technology. She was then transferred to Dr. Twisted as part of Sentius’s alliance with the mad doctor, becoming the field leader of his robot girls and his favorite bedroom conquest, and served him until both were defeated by the Superheroine Squad.

After Sentius’s defeat, Marcy discovered that her implants gave her the ability to manipulate and communicate with machinery, providing her with a very useful superpower in these modern times. Taking the name “Silver Satin”, Marcy fulfilled her dream of joining the Superheroine Squad and now serves as the team’s chief science and technology expert and was even given her own special crime lab. She was briefly the junior partner of Brown Sugar, who taught her enough self-defense maneuvers to ensure she was able to hold her own in a fight.

Marcy was briefly manipulated via her cybernetic implants by Max Indeks into resurrecting Sentius, though she managed to escape with the aid of her friend Shelley Calvin and a reprogrammed Mechana. Silver Satin managed to give the team the edge they needed when she managed to revive the cryogenically frozen heroine Omega Woman and when she disabled Blackout’s power nullification abilities and bravely lead the team to a close victory over the mad machine once more during the climax of the Night of the Drones.

She has developed a strong bond with Mechana during this time and the two appear to be sharing an apartment together. She even appears to be on amicable terms with the reformed Ted Twiss, a kindred spirit in the field of robotics and technology. 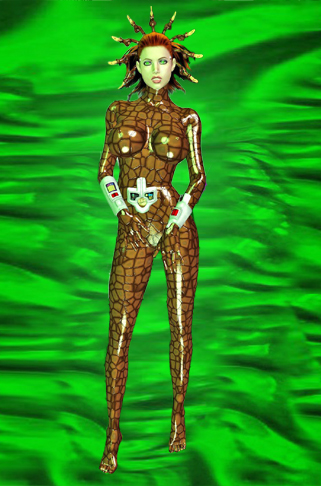 Later, Silver Satin and other heroines became aware of disappearances of several Metrobay women. They were being harvested and converted by the Ghaanite interdimensional aliens. Along with Omega Woman and Knyght Fighter, they traveled to the Platinum Earth universe only to discover Brown Sugar had been previously enslaved and converted into a hive slave. Silver Satin herself became captured and controlled by a cybernetic parasite called an Aana’var, which promptly assumed control over her body. She then led an attack on citizens of Metrobay and created her own cybernetic slaves, whom she calls “Mechanas”, possibly due to her lingering affections for Mechana.

Silver Satin and her comrades were freed by the combined efforts of the Platinum Earth and Superheroine Squad heroines and returned to Metrobay alongside the other liberated women. However, she confessed she enjoyed the power and control the hive had given her, which both ashamed and thrilled her.

Marcy was also instrumental in developing the reverse neuro-stabilizer and restoring heroine Enchantress to her right state of mind, though she admitted she was not very fond of the reformed villainess. Her actions have taken a more calculating approach, depending on data and her computerized brain to feed her statistics, and neglecting her human aspects. Coupled with her experienced in Platinum Earth, she’s begun to wonder and fear that she may be becoming more machine than woman.

Marcy’s latest ordeal came when the mysterious “Drone Agenda” found its way to the Superheroine Squad. Sensing her potential, she was assaulted by a reprogrammed Chrome, the former Blackout, and hooked up to the lab machines nearby to be infect. She was reprogrammed and retrofitted to become the new drone leader, CyberQueen, and instantly began enslaving those around her to add to her small army of cyberslaves.

Marcy is also the niece of the warden of Metrobay State Penitentiary, Marcia Smith, whom she idolizes and respects immensely.

After Sentius turned her into a living computer, Silver Satin was given the ability to harmoniously link up with almost any digital device and communicate with it. Her computerized brain is capable of storing large volumes of data and information and she can even reprogram computer programs and robots by touch alone. Unlike robot women or most cyborgs, Marcy is capable of thinking in normal human capacity as well as binary, making her brain a true living computer.

Despite these abilities, her greatest gift remains her mind. She is one of the brightest women in Metrobay and is capable of creating some of the most technologically advanced gear and weaponry the Superheroine Squad may ever see. Now that her mind has been digitized, her capacity for learning has only increased dramatically.