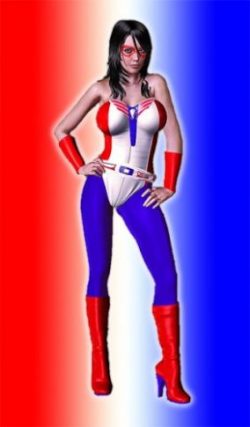 Paula Revere, better known to the world as Freedom Girl, was a young engineer recruited by the military to work on several secretive projects, as well as the pure and virtuous crime-fighter and junior partner to American Amazon, forming a crime-fighting duo of truth, justice, and the American way. She and American Amazon were good friends and fought together for years before American Amazon decided Paula was old enough to follow her own path and carve out an identity for herself. While American Amazon decided to remain in Capital City, Paula felt her talents could best be used in Metrobay with Grrl Power.

Freedom Girl’s solo career in Metrobay looked promising, until she was eventually tricked by a young R.O.P.E. associate, Wesley Mitchell, “saving” him from a thuggish attack, which only served to distract her enough for him to remove her power belt. Vulnerable and powerless, she was forced to undergo a mental brainwashing courtesy of the Modification Machine, turning this once proud paradigm of wholesome virtue into a submissive and doting housewife to young Mr. Mitchell. Paula and fellow R.O.P.E. slave wife, Janice Prissman – a.k.a. Juris Prudence, were eventually freed thanks to the help of the Action Cats. Janice helped her get properly divorced after there ordeal. 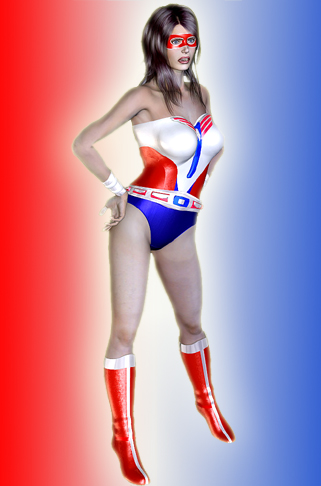 While Paula was a submissive wife, American Amazon went missing. When Freedom Girl and Juris Prudence recovered from their brainwashing, they began training with the Superheroine Squad in Metrobay to regain their crime-fighting senses and knock the dust off their fighting skills. Paula found out about her missing mentor during that time. She and Janice went back to Capital City to attempt to locate her old friend. Upon their arrival, they re-established the Superheroine Squad’s presence back in the city.

When Freedom Girl and Juris Prudence made it back to Capital City, American Amazon was missing with no trace. While searching for clues to her absence, they took a break on a building top to watch the Independence Day fireworks. At the same time, the perverted Calico Cougar was there waiting to spring a mind control trap. Ensnared, the two heroines were whisked away to be brainwashed into Madame Mynx’s desired new roles. Freedom Girl was transformed into ‘Skank’ the patriotic hooker and sold to Pimp Biggie. She now works the street corner as his prized possession.

Powers
Freedom Girl’s powers originated from her special power belt that she claims to supposedly be of Amazonian origins, bestowing upon her great strength, vitality, speed, and reflexes. In actuality, these powers are generated from bio-enhancer gadgets that Paula developed and designed into the belt. Once it creates a loop around her body, she becomes a part of the circuit and her normal athletic abilities are increased 5 times.