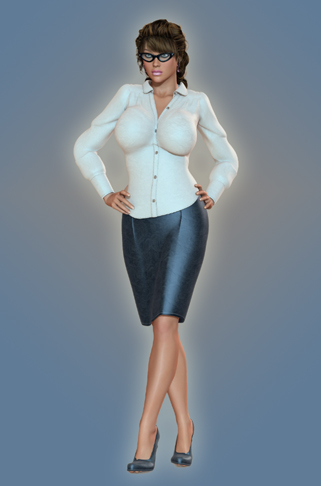 Name: Dr. Fawn Buxley Age: 32 Height: 5’6″Hair: Brunette Occupation: Professor, Scientist Affiliation: Metrobay UniversityFawn Buxley was a pioneer in the fields of artificial intelligence and biotechnology, and accomplished more in her short time on the Metrobay University faculty than most professors accomplished in a lifetime. So why is it that she is but a footnote in the annals of Metrobay’s scientific history? Because she was effectively erased from existence in an experiment gone all wrong!Several years ago Fawn was the lead developer on an A.I. program that she hoped would change humanity for the better. This program melded the analytical power of a supercomputer with the personality and independent thought of a human mind. Like her mentor Gilbert Petto, Fawn wanted to use her brains to help her fellow man and make Metrobay a better place to live. However, the program – nicknamed “Alpha”, after her girlhood crush Alpha Man – decided that humanity was flawed and needed to be ‘fixed’ by merging humans with machines. It’s first target? It’s creator, Fawn herself. Against her will, Fawn was transformed into a human robot, completely obedient to Alpha. The new human/machine hybrid, codenamed “Fembot”, was instructed to seek out additional humans to convert. The last image was of busty coed Nadia Guerrero in Alpha’s clutches, poised to become a fembot much like Fawn before her. The story has not been completed. Notable Appearances: Femina Machinae