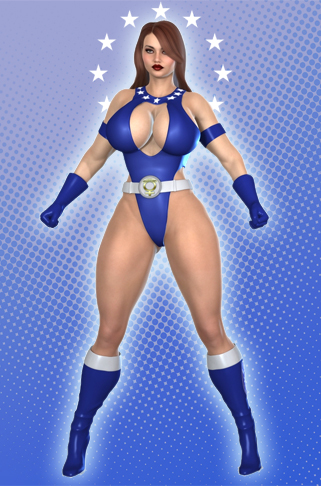 The tale of the woman who would become MacroLass is a long and storied one even before she obtained her powers. During the early 80’s the notorious supervillain Frank Einstein left Metrobay for a short time to ply his trade in Hollywood. Desirous of creating a NEW body for himself, he tinkered with in vitro fertilization, settling on famous pop star Shelly Easton, who had attracted the attentions of his less sophisticated persona, to be the mother. After ensnaring her with a plot posing as a therapist, he acquired DNA samples of some of the film industries’ most handsome male stars then mixed it with his own unique chromosomes. He was certain that the child would be born metahuman, but to his dismay not only was the child normal but it was also female. Feeling that this line of research was a waste of his time and efforts, he abandoned it and went back to Metrobay after leaving the mother with a compulsion to carry the child to term. Emily Easton was born, to all appearances a normal healthy child. Her mother had little interest in raising her and so put the care of her off onto her agent Shecky Bernstein, who had several children of his own. This influenced young Emily a great deal in that she thought of herself as Jewish, even having a bat mitzvah. “Uncle” Shecky actually lived in Metrobay which came to be the place Emily considered home. Fortunately for her, she gained the benefits of APEX Industries innovative water treatment program which had the usual effect on her physical development. 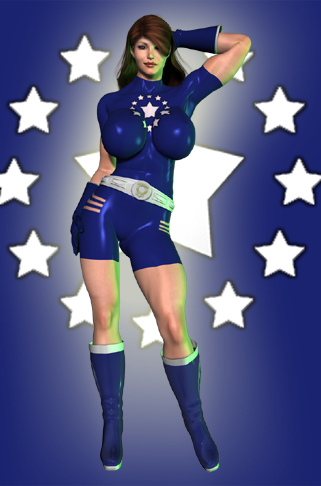 Keenly interested in her “uncle’s” trade, she apprenticed under him and joined his talent agency as an intern. She had excellent people skills and a talent for organization which made her well suited for the job. She probably would have continued on to a career as a Hollywood talent agent if not for an incident before a Halloween party in Metrobay. After an accident ruined her original costume, she was forced to go out to try and find a new one the night before. As fate would have it, she ran into some young thugs roughing up an old man outside of his “magic” shop and chased them off. The old man (the same one who would give the Speed Demons their enchanted objects) saw the potential in young Emily and sold her an enchanted costume, one originally worn by a short lived heroine named Façade, who had shapeshifting abilities.

The magic in the costume reacted with Emily’s latent metahuman abilities, granting her not only Façade’s ability to alter her form but also total control over her body’s size and density. Astonished, the young woman quickly learned how to use her new powers…and immediately went to Hollywood to try to earn some bucks. She then proved the old axiom of “only a fool has himself as a client”. Blinded by her eagerness, she signed a contract with an infamous schlocky film producer to make a TV show called “The Adventures of MacroLass”. Persuaded at first to make herself more “photogenic”, she turned her brown hair to blonde, inflated her proportions, and let herself be put in a scandalously skimpy outfit. 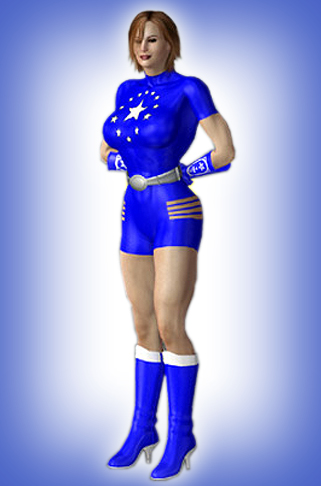 The show was roundly panned by critics. Today, only fragments of the pilot show can be found on the internet. The final straw came during an episode guest starring the infamous Captain Love, ending up with her stumbling and falling atop a parking lot full of studio executives’ cars. Humiliated, Emily tried to get out of her contract…only to find out that she could be sued for abandoning her MacroLass identity. And not only that…every time she used her powers she would actually have to PAY the production company!

A less honest person might have turned to villainy at this point. A less stubborn person might have just given it all up and stopped being a superhero. But Emily was bound and determined that she would make it as a heroine and that she would do it as MacroLass. But she was also bothered that neither SAG (the Screen Actors Guild) nor the courts would stand up for her rights even though she was trying to do the right and heroic thing. So that no other metahuman would have to endure such embarrassment, she began specializing in the field of metahuman talent management, helping supers get jobs by use of their powers. She is very scrupulous about representing her clients and goes to extreme lengths to make sure that their employment is fair, non-exploitative (or reasonably so), and most importantly legitimate. Her company Extremely Emily Easton Enterprises is one of the hottest talent agencies in the world even for non-super clientele. She’s also gotten a degree in business law from the Busby Berkely College of Arts in the interval as well.

Emily has clients including the hottest names in superherodom, including Alpha Woman and Ms. Metrobay from the Superheroine Squad. It was on the strength of these relationships that she was invited to join the Squad after the H.E.R affair. She still hasn’t done much as a heroine, both due to her busy schedule and the legal complications of her powers but she helps the Squad as best she can.

It’s been established that Sandra Quimby works for Emily as a part time accountant. In her capacity as one of the rash of mysterious robo-units sweeping Metrobay, Sandra surprised Emily at the office and used a strange device against her employer, subduing her so MacroLass is also now an unwitting robo-unit as well. In the process, Emily’s breasts were augmented by several cup sizes; it is unknown how this will affect her heroic identity. Her new intern, Hypnotica, was subsequently enslaved as well.

It’s been revealed that the hypnotic siren Melody is actually Emily’s mother but very few details have been revealed about that relationship except that they’ve been estranged for several years.

Recently there’s been another complication in her life as a longtime fan of her show who had lived in Germany, Riberto Schlüssel, had become the villain Keymaster and attempted to join R.O.P.E. in an attempt to get closer to her.  After capturing her he used his magical Philosopher’s Key to turn her into a fanatically amorous love slave but he released her after the physical demands of “keeping up” with her proved to be too much for him.  However, whether due to the magic of the Key or the power of true love, there seems to be lingering feelings between them that are inspiring devotion beyond the normal relationship between heroine and nemesis.  But only time will tell…this story is still ongoing. 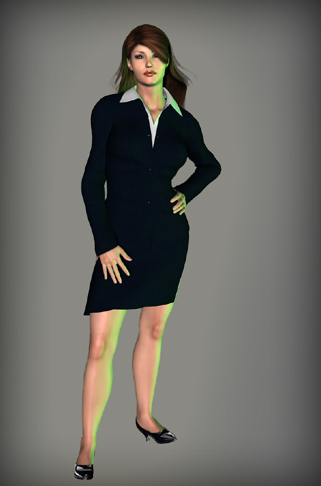 Emily has distinctly different human and superhuman forms. In her non-hero identity, she possesses the strength, stamina, and agility of a human female who engages in moderate regular exercise. She has some self defense training but by no means is a martial artist. She is a savant in business matters and is easily able to multi-task making deals during even strenuous physical activity.

When she changes, MacroLass gains almost a foot and a half in height and her flesh becomes twice as dense as a normal person’s as well as gaining vastly enhanced stamina. She becomes bulletproof and can easily pick up a car one handed. She can also fly.

Without her costume her powers are slightly limited in that she can only manipulate her size or body’s mass. Her height can go from 5” to well over 50’, her flight speed and strength varying proportionately (smaller = weaker but faster, bigger = stronger but slower). Alternatively, she can reduce her mass to zero to become intangible but more agile or diamond hard but nearly immobile. Using these abilities is somewhat tiring and reduces her effective time in a fight. With her size or mass maxed out and straining to her utmost, she could pick up a destroyer or large submarine.

Her costume normally remains with her at all times, changed to a ring with a lightning bolt insignia. With her costume fully on her, she gains much more control over the molecules of her body and the costume, being able to change its shape or coloring at will. She’s easily able to imitate the look of a specific person but has trouble copying voices and cannot fool retina or fingerprint scanners. If she takes the costume off or it is removed, she is stuck in the form she was shifted to and unable to turn back into Emily.