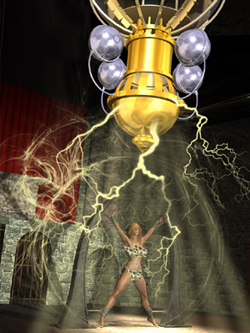 The Slavemaker is a piece of Atlantean technomacy, using both sophisticated science and mysterious alchemy and magic. It was used to convert unruly captives of war into mindless zombie slaves to the empire, devoid of emotions, individuality, or wills of their own.

A male captive named Draven was taught the art of technomacy in an attempt to culture and educate him. However, he betrayed the trust he was given and instead used his knowledge to gain control of the Slavemaker technology, using his very teacher as his first guinea pig. Draven then methodically began to convert the entire royal house into obedient zombie slaves to his whim, using them to advance his position in the government and even enslaved the queen, forcing her to give Princess Valaya to him in marriage and to bestow the sacred serpent Ophidian to him to grant him immortality.