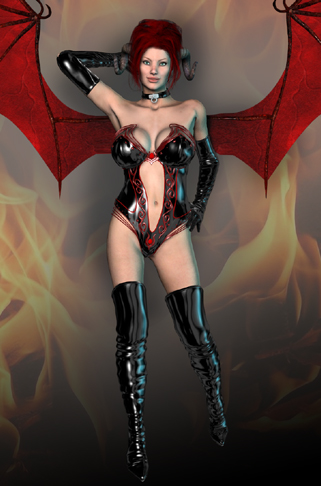 Lascivia is a relatively young demon mistress of hell, ruling over the 5th circle of the lustful, Luxuria, where she punishes the souls of those consumed by lust to serve her for eternity. Despite being a demon, she is beautiful and fairly human in appearances, save for a pair of tell-tell demonic wings on her back.

Despite her “good” intentions to be a worthy mistress of hell’s legions, she appears to be not altogether evil, a serious character flaw in a world where evil is the highest priority. Apparently, her subjects were rather fond of her and enjoyed her “punishments”, and she was fair and appreciative of them, making her ill-suited for her position. She was demoted for not being evil enough by the queen of Hades,Sadistra, her position given to her step-sister Deminsha, and she was to be given over to Sus the swine-demon for his pleasure.

Unwilling to accept this, Lascivia fled her position in hell. By a stroke of luck, a portal to the human world was opened from the other side, enabling Lascivia to escape, where she crashed into the human investigator Bliss Starliss. 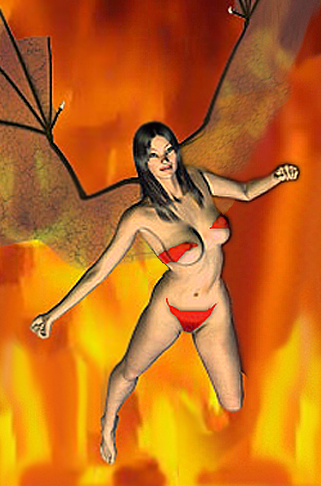 It turns out a man resembling Feelix Von Ick was doing an unethical experiment in the year 2169 and had created the portal. He captured both Bliss and Lascivia, keeping Bliss for his pleasure and Lascivia for further scientific study and observation in an attempt to clone a supernatural being.

In the present, Lascivia was recently pulled from her hellish dimension into the human world after the Metrobay University student, Mildred Glestein, read a forbidden tome of summoning rituals, trapping the demon in Metrobay and, being too good to re-enter hell, forcing her to live with the mousy student until she can discover a way to return home.

Her supernatural abilities are almost limitless in nature and potential. She has displayed acts of flight, unnatural hypnotic abilities, and unnatural sensory awareness, though this represents just a small sample of her demonic powers.