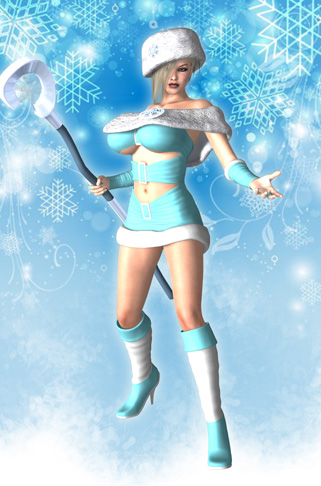 Diamond Frost is one of several superheroines who comprise the international crimefighting unit known as the “Gem Angels”. A native of Russia’s Siberia region, Oksana was bequeathed with the diamond power gems and staff and given the ability to control the frigid environment around her. She teamed up with her fellow Angels to combat evil across the Far East, before relocating to Metrobay as part of a superheroine exchange program.

Oksana got a taste of Metrobay-style villainy when she encountered the Ringmaster in Grime City and temporarily fell under the influence of his Thrallium ring. She and fellow Gem Angel Ruby Inferno were forced to serve the Ringmaster and battle the similarly-powered team of Snowflake and Solaria, a fight which the Grrl Power youngsters won in rather convincing fashion.

Frost is one of several Metrobay heroines with the (somewhat) dubious distinction of having a robotic doppelganger constructed in her image. A.C. Quire, aka “The Collector”, hired Noctrissa and Cyberstar to build a duplication machine based on Gilbert Petto’s designs, and a Diamond Frost lookalike was one of four to come off of the assembly line before the device was destroyed by a malfunctioning copy of RebelPhase. The Frost-bot was placed on display in The Collector’s museum until it was reactivated and reprogrammed to serve as a member of Vic Reno’s robotic staff of Headlights Hotties. It is not known if Oksana has any memory of the existence of her dolly double.

Notable Appearances: “All Dolled Up”, “An Acquired Taste”